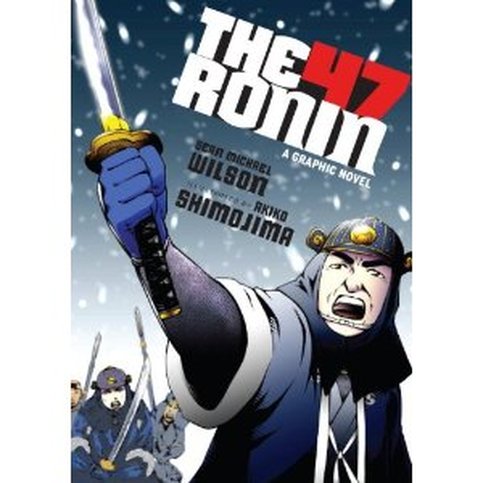 The story of how and why the 47 ronin get revenge for their dead master.  Now a 'major movie' as they say, staring Keanu Reeves - but their version is very FAR from the true story! Buy our book and compare the two.

"In the eighteenth century, forty-seven samurai avenged the death of their master in a plot that would take over two years to complete. After succeeding in their mission, the masterless samurai—known as ronin—all committed ritual suicide. The story, which is a national legend, remains the most potent example of Japan's deeply rooted cultural imperative of honor, persistence, loyalty, and sacrifice.

The historical event has inspired many writers and artists over the years and numerous fictionalized versions and adaptations have emerged. In The 47 Ronin, Sean Michael Wilson has created a historically factual portrait, enhanced by evocative and often lyrical drawings by Akiko Shimojima. While there are other depictions of the story in manga form, this version stands out as being the most accurate and most compelling. Wilson and Shimojima have made the characters nuanced and relatable."

And in digital format here:
http://www.comixology.com/The-47-Ronin-A-Graphic-Novel/digital-comic/48882 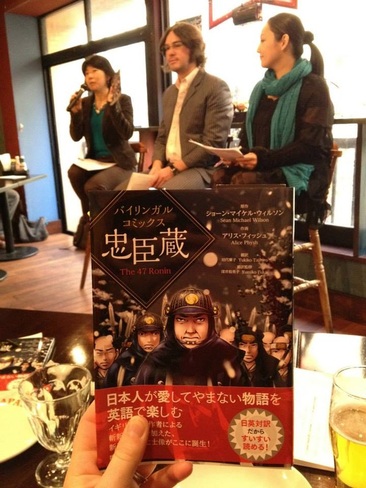 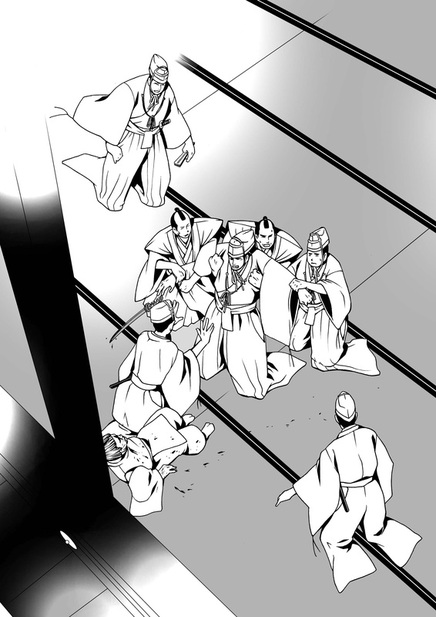 “A masterful retelling of one of the greatest stories in Japanese culture. An engrossing, engaging, emotional and unforgettable epic.”
- Jonathan Ross, BBC television presenter

"The 47 Ronin is a dignified telling of a dignified story. It’s violent when it needs to be, precise and calm when it’s called for and never once loses focus. This is a tightly focused, perfectly pitched retelling of the story and a perfect entry point for anyone coming to the story for the first time. The Keanu Reeves version may have all the spectacle, but this version has all the heart."
- Alasdair Stuart, Bleeding Cool.com

"If you enjoy works like Lone Wolf and Cub, you will probably enjoy this graphic novel as well. I'd give it four out of five stars."
- Angel Rivera, Librarian

" In stark contrast to the upcoming Keanu Reeves film of the same title and very, very, loosely based on the same incident, this book promises to be more historically accurate. Where Reeves’ film features fantastical elements such as witches and giants, the manga focuses on historical drama, and the humanity of the characters, rather than spectacle fantasy...readers interested in accurate Japanese history rather than Hollywood embellishment will enjoy this well-done retelling of this legendary event..."
- The Japan Times

" I think that they did a superb job capturing more than just the basics, and fleshing out some of the characters, most notably Ōishi Yoshio, the leader of the gang... Given the page count and the limitations imposed on the story... Wilson did an excellent job detailing the historical facts, writing sympathetic characters, and keeping readers unfamiliar with the incident interested in what will happen next. I'd happily recommend this for anybody interested in the period."
- The Hipster Dads Bookshelf

“Another awesome book from Sean Michael Wilson. I have all of his Manga adaptations of classic Japanese texts including: Hagakure: The Code of the Samurai (The Manga Edition), The Book of Five Rings: A Graphic Novel, and The Demon's Sermon on the Martial Arts: A Graphic Novel... and they are all excellent books. I had heard of the story of the 47 Ronin, but this the first time I've seen it all the way through... and I really enjoyed it."
- Ben Langley, Amazon 5 star review.

"Readers will enjoy the fast-paced action and intricate plotting once the revenge plan unfolds. Traditional manga-style art enriches the story, bringing Japan's Edo era to life through detailed depictions of period costume and architecture. Grisly scenes of ritual suicide and battles may deter the faint of heart, but most will be undaunted. While this title will hold greatest appeal for those who have an interest in Japanese history, it will also attract fans of the recent Hollywood screen adaptation, providing an engaging way to learn about the film's inspiration. A solid purchase where manga is popular. Gr 7 up. CA KEY: * Excellent in relation to other titles on the same subject or in the same genre."
- Allison Tran, Mission Viejo Library, School Library Journal

Lastly, by far the most indepth, intelligent and fair is this account at the Samurai Archives Japanese History Group. They, being people that REALLY know Japanese history and samurai well, note various mistakes (accurately, we admit), but nevertheless conclude with a resounding yes:

"...if you’re looking for an adaptation of the Chushingura  legend that sticks to the story and doesn’t include fantasy monsters, witches, giants, or gaijin actors shoehorned into the tale, you won’t find a better executed one than Wilson’s and Shimojima’s “The 47 Ronin”. It’s an adaptation that manages to infuse both the Ronin and their foes with humanity. Author Wilson makes you feel Asano’s outrage, Kira’s panic, the conflicting views of Asano’s retainers, and the excitement of the raid. Artist Shimojima gives us a period-accurate Japan laced with dynamic action and quiet moments in turn. They’ve taken what is often depicted as a morality tale filled with two dimensional characters and given it depth and texture." - The Shoguns House 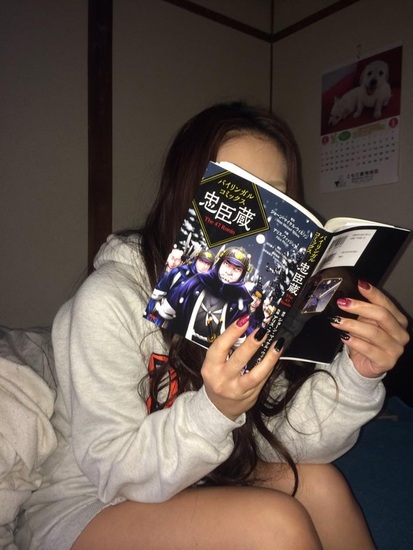 Ladies! - be smart and read manga!
​NB - A special note Just to say that some readers at places like goodreads and amazon have not really 'got it' about this book. Some felt the panel to panel flow on the book is stilted or confusing. Others, that it’s too focused on historical accuracy at the expense of an exciting read. Or that some of the English is badly worded. There was even a suggestion that I have forgotten how to use English! So, just to confirm that all the English was deliberately and carefully chosen to reflect the formal ways that samurai then would have spoken to each other, we think, based on our experience in present Japan and research into Edo era Japan ('we' being me, the Japanese artist and Japanese editor).  And the panel to panel flow style is also chosen very deliberately. It may seem to jump around abruptly sometimes, but there is no element of accident or mistake in that - it's the style I've chosen. We tried to make a version of the 47 ronin story that was not a 'join the dots' over simplified one. Also to avoid the cliched, hyperbolic, exaggerated style of hollywood… instead to make a version that was stark, ambiguous, subtle. One that focus not on sex, violence, explosions, blood, etc. One that focuses on the human drama, the culture of the time and tries to be close to the historical tale. I thought folk would ‘get’ that, but it seems that some don’t. Thankfully many do, shown in the several very good reviews we’ve had so far.

As to the film version and our version: My publisher asked me not to focus on slagging off the film version, but if asked if it's any good i told them that i would have to paraphrase their first president: "I can not tell a lie - it's rubbish!" But then, since i've learned a lot about translation/adaptation from the Argentine, Jorge Luis Borges, I know that the grounds for my feeling the superiority of our book version of the film version is not so clear. He insisted that there is NO definitive work on anything, no definitive original novel or story etc. Therefore every type of translation is valid, various types of distortion are ok, and can even be BETTER than the original. So, then, my ground for criticising the film version of the 47 ronin for being VERY unconnected to the 'REAL' events kind of disappears up in smoke. Rats...

Also, although the publisher noted that this was the first true historical account of the 47 ronin, that is claiming too much. Some elements are closely based on what historical research considers the true story, some elements are based on the Chushingura fictional versions, and other elements are made up for our version. So, it’s more modest and accurate to say: ‘our version is not the definite historical story, but it’s perhaps QUITE close to it’.  That is hardly a pithy back cover statement though, is it! 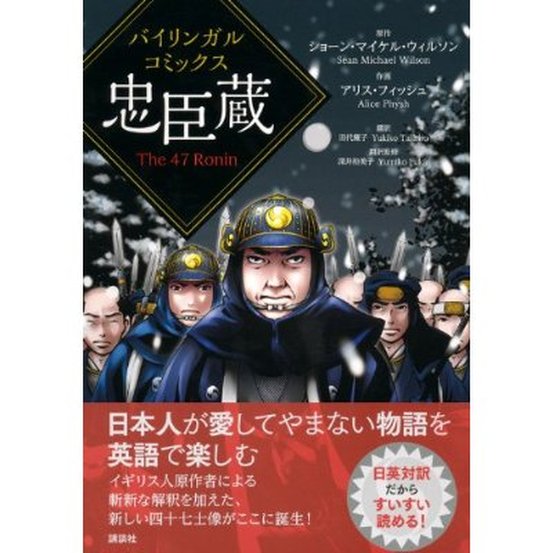 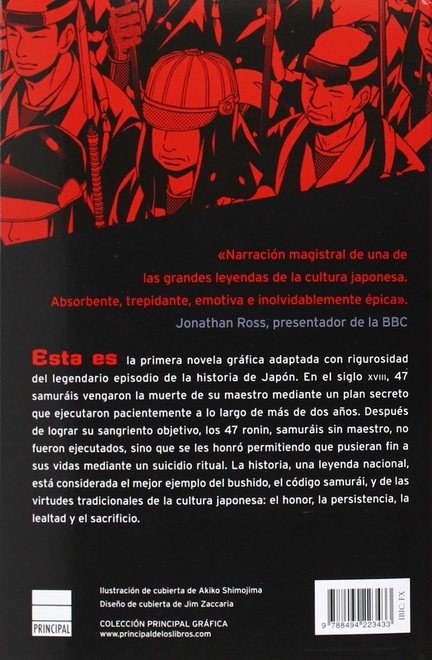