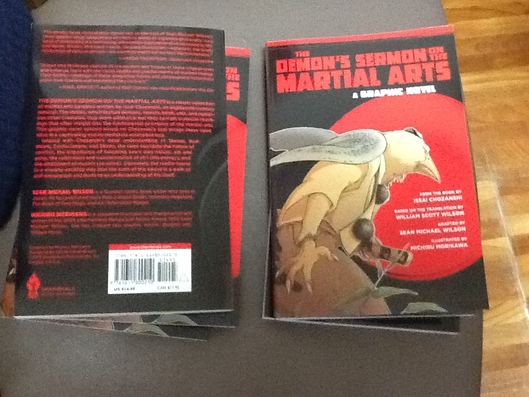 The mix of Eastern philosophy and animal visuals is an appealing one, with Michiru's artwork her best yet.

"A graphic novel version of this classic collection of martial arts parables, written by Issai Chozanshi, an 18-century samurai, brings these tales alive in a captivating and immediately accessible way.  The stories, which feature demons, insects, birds, cats, and numerous other creatures, may seem whimsical, but they contain essential teachings that offer insight into the fundamental principles of the martial arts.

Infused with Chozanshi’s deep understanding of Taoism, Buddhism, Confucianism, and Shinto, the tales elucidate the nature of conflict, the importance of following one’s own nature, yin and yang, the cultivation and transformation of ch’i (life energy), and the attainment of mushin (no-mind). Ultimately, the reader learns in a visually exciting way that the path of the sword is a path of self-knowledge and leads to an understanding of life itself." 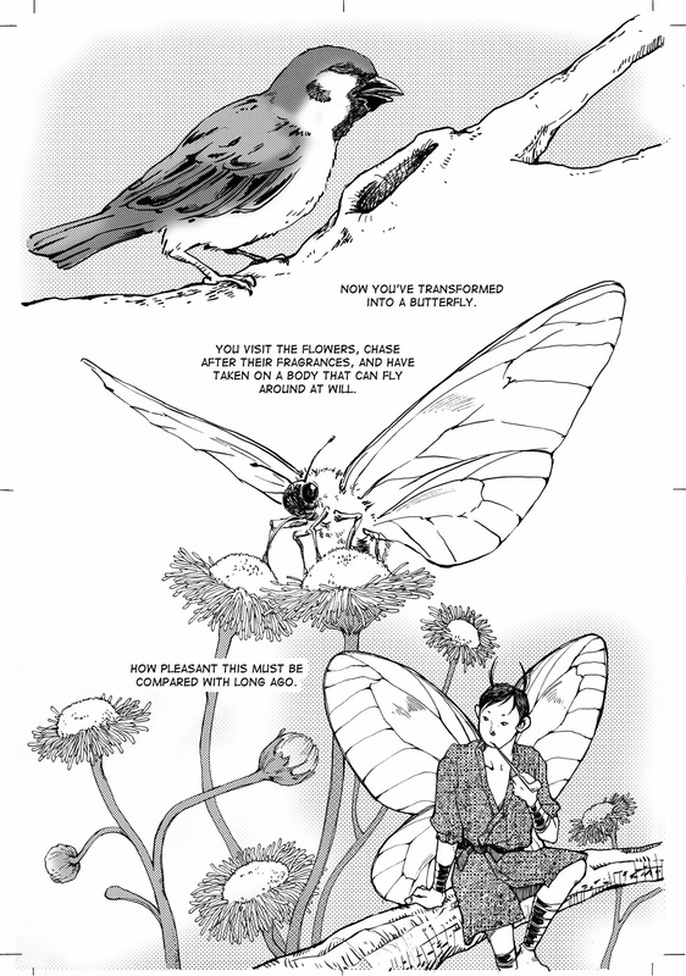 “This poetic book immediately stands out as the best of Sean Michael Wilson's three graphic novel adaptations of classical works of Japanese philosophy. As a book of philosophy, it’s fascinating; a dreamlike exploration of consciousness, life, and death. Michiru Morikawa's artwork is the perfect match for the text, her eerie, detailed illustrations—especially the lovely renderings of various animals—perfectly fitting the poetic feel. Recommended.”
-Jason Thompson, Otaku USA magazine

"A beautiful transformation of martial arts philosophy as told through fairy tales. A recommended read, whether this form or the more standard text, for students of martial arts as a whole."
- Tegna, Good Reads reviewer

"I must say, this is off the charts.....but only if you don't mind stopping to think in between pages....a lot! Here is the map that worked for me. Read and/or listen to a regular version of the Book of 5 Rings first. THEN.....and only then,wait a day or 2 if you want and then dip into Sean's illustrated version so you can immediately pick up all the nuances in facial expressions done so well by the illustrator Chie Kutsuwada. Dont be fooled thinking because this is in comic book "form"...its just a comic book. Big mistake. "
- Marc, Amazon review

"I have to say that by far this is one of my favorite books. The beautiful art and ease of reading this graphic novel version allows for it to be accessible to many more people. Since buying my first copy I have had to buy a subsequent 7 or 8 because I keep giving it away to other people. It really is that good. Some of the concepts in it may be difficult for some people to grasp, but if you sit with it long enough, they are phenomenal insights on the nature of life, let alone martial arts."
- Oscar C Perez, Phd.

“Wilson and Morikawa capture all the wisdom and beauty of these original texts and enhance them with the visual vitality and playful charms of modern manga. Their faithful retellings of these allegorical fables and philosophical reflections prove how timeless and rewarding they truly are.”
- Paul Gravett, editor of 1001 Comics You Must Read before You Die

" I have been searching for a graphic novel that touched on more philosophical and in depth subjects for years and I have finally found it with The Demon's Sermon on the Martial Arts. Everything about this book is above and beyond anything I have found in terms of graphic novels. The artwork is beautiful, even though it is black and white which I generally do not like, the story has a wonderful flow which actually has a deeper meaning talked about it the afterword, and the subjects contain deeper philosophical questions and teachings that almost require them to be read again and again. I think what puts it over the top however is the whimsical and unexpected characters that bring the story to life. Have you ever encountered an enlightened cicada that taught you the secret of happiness? Exactly. This will definitely be part of my permeant collection and I plan on buying everything that has been released from William Scott Wilson, Sean Michael Wilson, and Michiru Morikawa. I'm keeping my fingers crossed that they are working on more gems like this!"
- Dylan, Amazon review﻿﻿

In one of the best and most insightful reviews I've ever had a martial arts expert gives a thorough analysis of two of our books and thankfully finds that they please him:
"Wilson’s presentation of the stories is excellent. As previously mentioned, the narrative flows smoothly from one tale to the next, and the center point of each is brought out in a subtle and effective manner. There’s a fine line between simplifying things to the point of making them kid’s stories and making them so complex as to defy comprehension, and Wilson navigates it well. The book is warmer, charming, and more endearing than “Five Rings”. How could it not be with all those talking animals? Wilson allows their personalities and foibles to shine through rather than just make them into another ‘Musashi’. As with “Five Rings”, readers will be rewarded with greater insight on each reading." - The Shoguns House
http://www.theshogunshouse.com/2013/08/a-graphic-approach-to-musashi-and.html


​Get the book here: 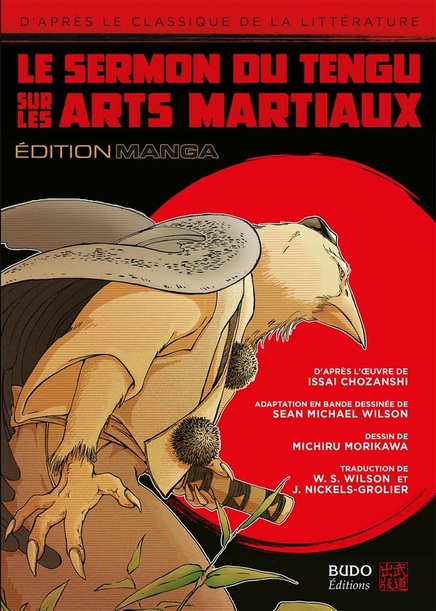 My first attempt at a PREZI visual presentation type thing.
Not very good, but it's a start - showing some stuff about our Demon's Sermon book. Press the next arrow to move it along and the zoom in control to see detail:
http://prezi.com/l6vuadwv18te/japanese-historical-manga-no3/?kw=view-l6vuadwv18te&rc=ref-33575369