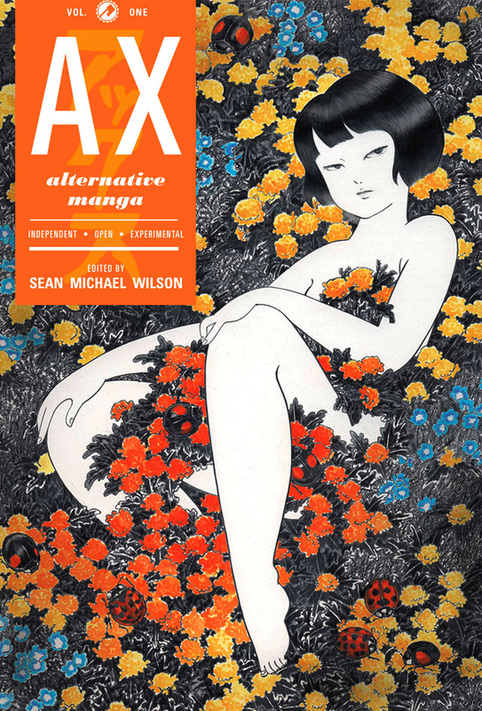 This is an extended version of an article I wrote for the Forbidden Planet website in Dec 2011, and excellent site connected to the comic book chain store in the UK:

Our collection of indie style Japanese manga, ‘AX: alternative manga’ came out Autumn 2010 from Top Shelf and was immediately received with open arms (it’s hard to receive a book with closed arms, I’ve found. You tend to drop it). Ax is: “ the premier Japanese magazine for alternative comics, heir to the legendary Garo. Published bi-monthly since 1998, the pages of Ax contain the most innovative, experimental, and personal works in contemporary manga -- the flourishing underground of the world’s largest comics industry.” (Top Shelf). It contained 33 stories by the likes of Yoshihiro Tatsumi (A Drifting Life), Imiri Sakabashira (The Box Man), Kazuichi Hanawa (Doing Time), Yusaku Hanakuma (Tokyo Zombie), Akino Kondoh, Shin'ichi Abe, etc.

Let me tell you something about how it came about. The idea for AX came in 2007/2008 in discussions between myself and the editor of the main Japanese AX, Mitsuhiro Asakawa. We wanted to show the wonderful, strange, inventive stuff being produced in AX to people outside of Japan. So we made a little pact together to do this.


A chap, presumably in the USA, has posted this below youtube piece about our AX:alternative manga anthology, from the point of view of a manga fan. Thanks for the eloquent and enticing endorsement of our book! 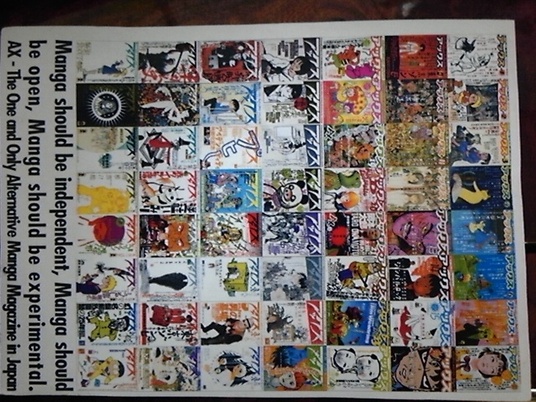 In our effort to make the AX book the first thing we did was make a flyer to describe what AX is about, what contents it has, and show various of the highly individualistic covers. I gave this out at the Bristol Comic con and at NY con in 2008 - so anyone who has it, hold on to it, as it’s already a piece of manga history. 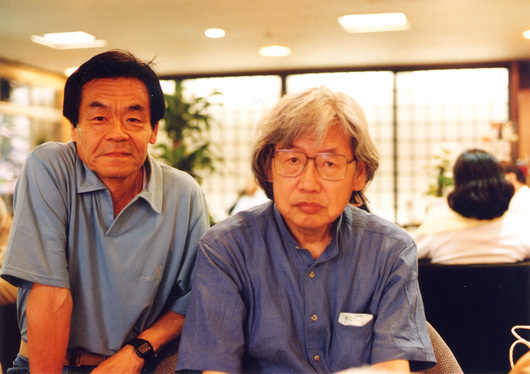 The next thing we did was to translate into English a very rare interview between Yoshihiro Tatsumi and Masahiko Matsumoto, originally conducted several year ago (Matsumoto has unfortunately died since then). In it they are discussing the early days of manga in the 1950’s, and the development of the gekiga style of mature manga more suited to adult readers.  We planned to do a book all about the development of the gekiga style, called ‘Gekiga Archives’. 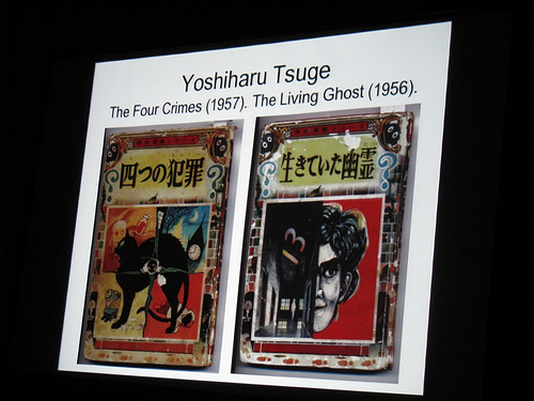 I went to NYCC in 2008 and showed various publishers the Gekiga Archives sample, the AX flyer and told them what the basic plan was regarding making 2 books: an English version of Gekiga Archives and an English collection of stories from AX.  Since we were not ready on all the extensive research need for Gekiga Archives (and we are still not, Asakawa has been too busy!), we decided to do the AX collection first. It was one of those ideas that everyone liked right away and so we had no problem getting a publisher for it, settling on Top Shelf because I admired their attitude and approach and the quality of their books.


(Covers of two books by the third key gekiga creator, Yoshiharu Tsuge, who has not yet had any books out in English. From Sean’s ‘AX/gekiga’ lecture in San Francisco) 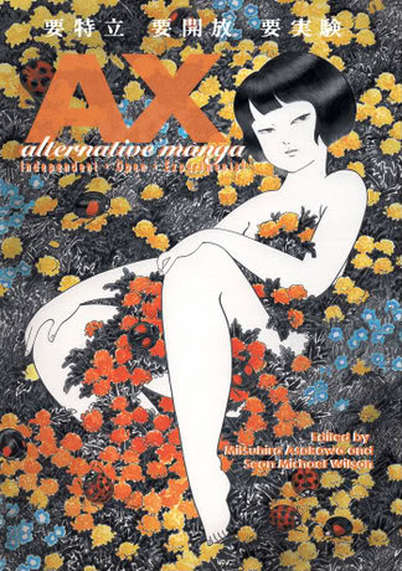 I also started doing my ‘Ax/Gekiga’ lecture then, showing rare visuals and info from the 1950’s and 1960’s  period of Tatsumi, Matsumoto and Yoshiharu Tsuge. I  go over the development of the gekiga style, its dominance in the late 50’s and it’s influence on mainstream manga. And then lead into visuals from AX, as the modern day inheritor of the tradition these early creators started. I’ve done in so far in Bristol, NY, San Deigo, San Francisco, Minneapolis and even in Japan itself (where unfortunately most young manga fans have forgotten about the word gekiga).

At the APE lecture in San Francisco in Nov 2008, Top Shelf had made up a couple of hundred copies of an ‘AX sampler’, a 14 page booklet, containing snippets from various stories. Another wee collectible thing! 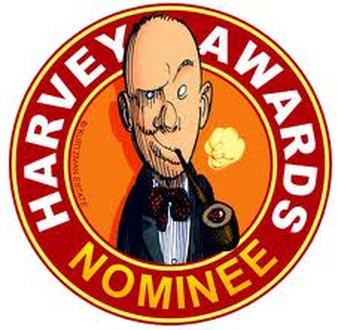 So, after a lot of hard work by myself, Asakawa and the lads at Top Shelf (Leigh, Brett Chris and Rob) we finally got AX volume one ready and launched it at San Diego in summer 2010. It was touted as one of the most hotly anticipated books of the festival and it’s reception proved this was the case. We sold a large amount in that time and it was voted by the manga critics there as one of the key books to come out that year.

This was later confirmed when Publishers Weekly selected it as one of the best ten books published in 2010. In fact their critics poll put it at joint second best (with Chris Ware’s latest in the top position) - not bad! And it was later nominated for a Harvey Award. It sold well and critics loved the book:

"This fantastic collection features eye-opening work by 33 representative artists. ... Ax provides... a home for the perverse and the profound. Libraries committed to sophisticated comics collections and to adventurous (mature) readers must buy this volume and those that follow." - Library Journal (starred review)

"A world's worth of material, this is a book that every serious fan of manga should read."
- Jason Thompson, author of Manga: The Complete Guide.

​"Within Ax's four hundred pages are over thirty stories that explode everything you might have thought about what manga is."
- David Brothers, Comics Alliance 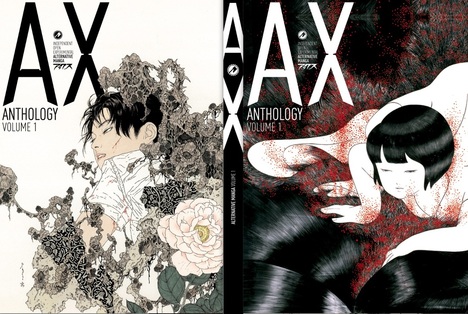 But it wasn’t all positive. Quite a few reviewers in the US took exception to the scatological toilet humour and some of the sexual content. Some noting that the book was spoilt by these elements and would have been better off without them. Myself and Asakawa, of course, disagreed. The moto of AX, both in Japanese and the English version is “Manga should be independent, manga should be open, manga should be experimental”. So, if this truly is a manga of openness and experimentation, where artists can express themselves, then we can hardly start saying: ‘Yes, you can do what you wish – ah, except for THIS thing, or THAT thing or this list of OTHER things.’ It slightly defeats the whole point, I think you’d agree.

In Jan 2011 a very nice French version of AX came out, via publisher Le Lezard Noir. Well done to them as they brought out a version even more beautiful than our English one (and without the printing mistakes!). 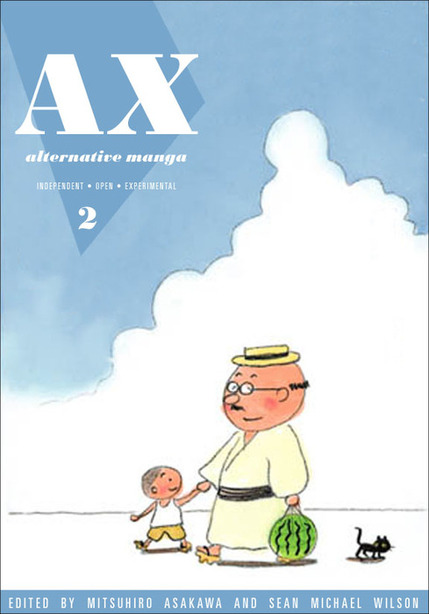 Volume 2 - mock cover for which is here below. Blue this time and with a style different from the slightly sexy cover of volume 1 - which some prudes also objected to – in order to display another aspect of the wide range of manga that’s inside. This volume will probably have only about 20 stories in it, instead of the 33 of volume 1. As we want to focus a bit more this time. 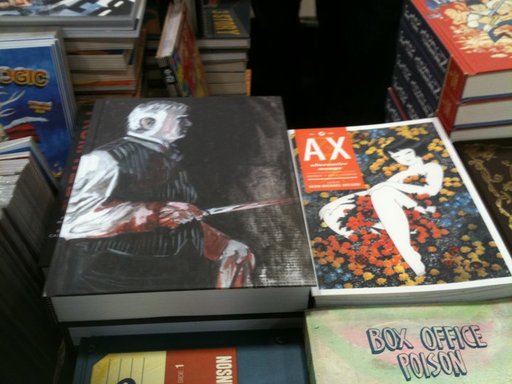 (Our lovely 'AX' book next to 'From Hell' on the Top Shelf booth - good company to be in.)
So, in conclusion ladies and gentlemen, if you have not checked out this Harvey nominated AX collection yet then please do. It's one of the most important collections of mature manga yet released in English.  But it still needs to be kept on the radar and continued good sales will ensure that volume 2 comes out! The SHOP link here will take you to amazon, or get it direct from Top Shelf's web site.