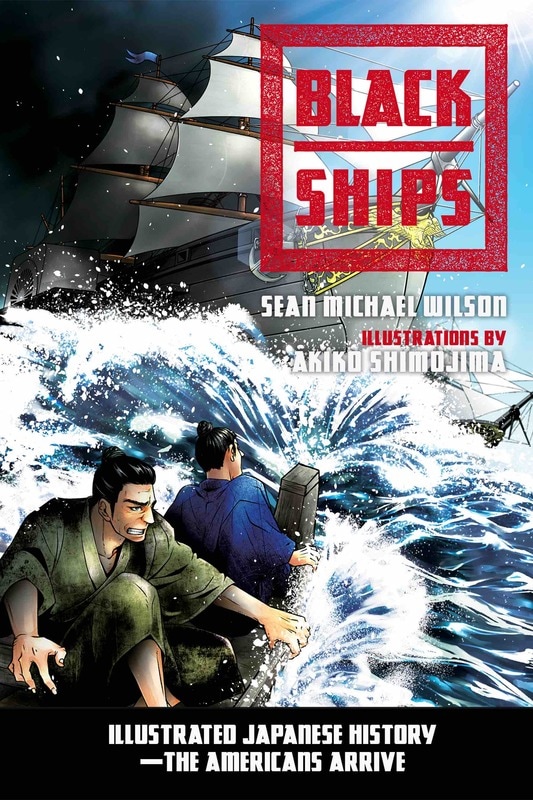 On the 14th of July, 1853, the USS Plymouth, Mississippi, Saratoga, and Susquehanna sailed into Yokosuka, Japan. The mysterious "Black Ships" had arrived.

In this stirring account of a pivotal moment in modern Japanese history, award-winning author and illustrator team Sean Michael Wilson and Akiko Shimojima tell the story of the four American "Black Ships" that arrived in Japan in 1853 under the command of Commodore Perry to force Japan to open up to trade. The book compellingly portrays the apprehension and confusion of the Japanese people witnessing the Black Ships steaming into view over the horizon; the anxious response of the samurai; the cat-and-mouse game that ensued; the protracted negotiations; and the eventual agreement signed on March 31st, 1854, as the Treaty of Kanagawa. Historically accurate and with an easy-to-read visual format, Black Ships conveys the personalities of the key figures in the drama: on one side, Commodore Perry and his captains, and on the other, Shogunate officials Abe Masahiro and Hayashi Akira. Wilson and Shimojima vividly capture the atmosphere of threat and change that pervaded Japan during Bakumatsu, the final years of the Edo period, as the feudal Tokugawa shogunate took its last breaths and gave way to the new Meiji government.

Get the book here:
https://www.amazon.com/Black-Ships-Illustrated-History-Americans/dp/1623170915

"I loved Black Ships. This was my 1st illustrated history. I congratulate Wilson and Shimojima's skillful use of text and art to provide an exciting description of a part of history of which I was unaware. Particularly being able to "feel" Perry's insensitivity to the concerns of the Japanese against his desires to get ports opened for American ships was so interesting for a comic book. I am truly looking forward to your next book of:Illustrated Japanese History:The Satsuma Rebellion."
​- Patricia, Goodreads

"This is a Graphic Novel, AKA comic book, but much more. It is an easy read with pictures explaining the U.S. -Japanese involvement from about 1853 through about the next ten to twenty years, with Belgium, England, Russia interspersed as well. Although I love History, and always did well in the school subject, I remember Commodore Perry. I can't help but think, however, that I might have done even better [and others might have done as well] if I had had supplementary books such as this to add to my understanding of the various points of the historical picture. There appears to be another book coming, and I am looking forward to it."
- Coleen, Goodreads

"A history comic book is a really cool idea. I don't think that I've seen anything quite like this. The format is easy to read, the dates are offset from the narrative text so they don't get in the way of the story."
- Chris, Goodreads

"A beautifully well-drawn history of events that happened in Japan in 1800's. I enjoyed following this tale of history in picture form. The detail and graphic are fantastic for this history period. A must read for any lovers of books with graphic pictures to show for this story."
- Antonia, Goodreads