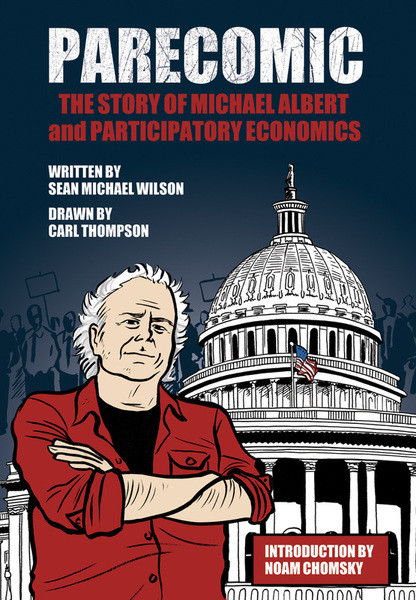 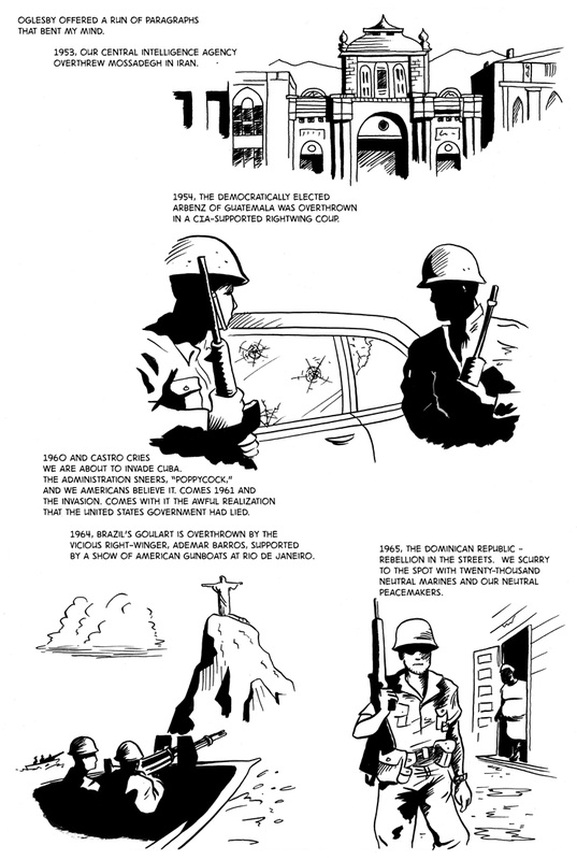 ​By Sean Michael Wilson and Carl Thompson, with an introduction by Noam Chomsky.

PARECOMIC is about Michael Albert and his life's struggle as a US left wing activist, reaching right back to the heady days of 1960's student demos and lifestyle rebellions. From the development of the anti war movement, civil rights, the woman's movement, and the black panthers to the establishment of alternative media like South End Press and Znet. PARECOMIC shows us Michael's story, and at the same time the ideas and issues that influence both our society and the better alternative that we can build via the anarchist influenced system of participatory economics. Or PARECON for short - hence the title for our book, which rather started out as a joke - but has stuck: PARECOMIC.

The idea of parecomic is to address diverse experiences, projects, and ideas about vision and strategy in a personal way, highly congenial to both enjoying the flow of the story and development of Michael's life as an activist. Written by myself, illustrated by Carl Thompson, with the permission and close collaboration of Michael Albert himself. Basic description: "...a graphic novel about something that affects us all: the system we live in - what's wrong with it, and how we might be able change it for the better! The recent upsurge in popular protest in the USA and around the world shows that people are not happy with the state of things. The Occupy movements show us that many people would prefer a better system, a model that will work for the 99%, not just the 1%."

Michael Albert himself has worked closely with us to check the authenticity of the scenes and info. He has contributed a substantial text section at the back of the book about Parecon ideas, and the introduction is by his long term colleague, Noam Chomsky, who also appears in the book several times. We think this is the first comic book/graphic novel that Chomsky has ever associated himself with.

We also wish to thank everyone who helped make the PARECOMIC kickstarter funding drive a success. 'Rewards' to all those who pledged will go out this month. That has given us a lot of encouragement - we've had lots of nice support about our plan of going into the ideas of parecon and Michael Albert's life in graphic novel format. We've had several good mentions and interviews, such as in Carl's local newspaper, the industry magazine Publishers Weekly and hundred's of people noting it on their blogs, facebook and web sites... great stuff.


The US publisher made this little presentation pack pdf for history teachers:

Where can you get Parecomic?

A 'look inside' sneek peek of the contents is on the amazon page about it. And a kindle version can be got there too: http://www.amazon.co.uk/Parecomic-Michael-Albert-Participatory-Economics/dp/1609804562

And for anti-capitalist folk who are not keen on amazon, the book can be got directly from the publisher, Seven Stories Press:
http://catalog.sevenstories.com/products/parecomic-michael-albert-and-the-story-of-participatory-economics

Or from distributor, Random House:
http://www.randomhouse.com/book/221067/parecomic-by-sean-michael-wilson-and-carl-thompson


Free pdf preview:
The pdf below is an excerpt from the Parecomic book.
This is pages 66 to 76 and deals with Michael's views and experiences regarding Noam Chomsky. 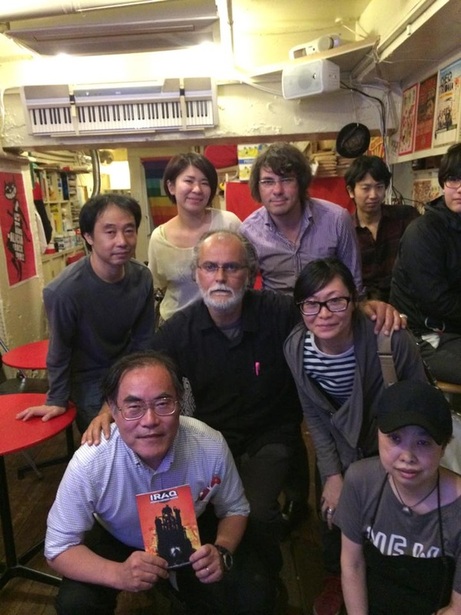 Tokyo Spring group then had me do a talk in the same place as that event, Café Lavandería, in May. Nice to be following in Chomsky's footsteps. We had a very good event, in English and Japanese, talking about the Parecomic book, parecon ideas and some mistakes that Chomsky had made regarding parecon when he talked there two months before. Michael Albert helped me out on how I should address Noam's points, since they included long standing disagreements between them regarding the coordinator class and balanced job complexes. The event went very well, as you can see from these atamaii nihonjin to the left.

If you are in Tokyo please visit the excellent and radical Café Lavandería in Shinjuku: 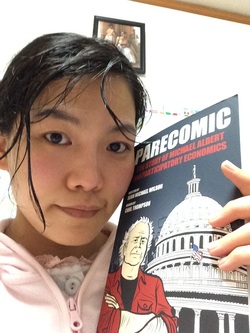 Here is a reader from Vietnam proudly displaying her copy.
RT television appearance with Abby Martin - Michael Albert, talks about how this philosophy would work for all, and why it’s different from other alternatives to capitalism. (Albert appears at the 3:25 mark and the PARECOMIC book is mentioned at the end of his section) 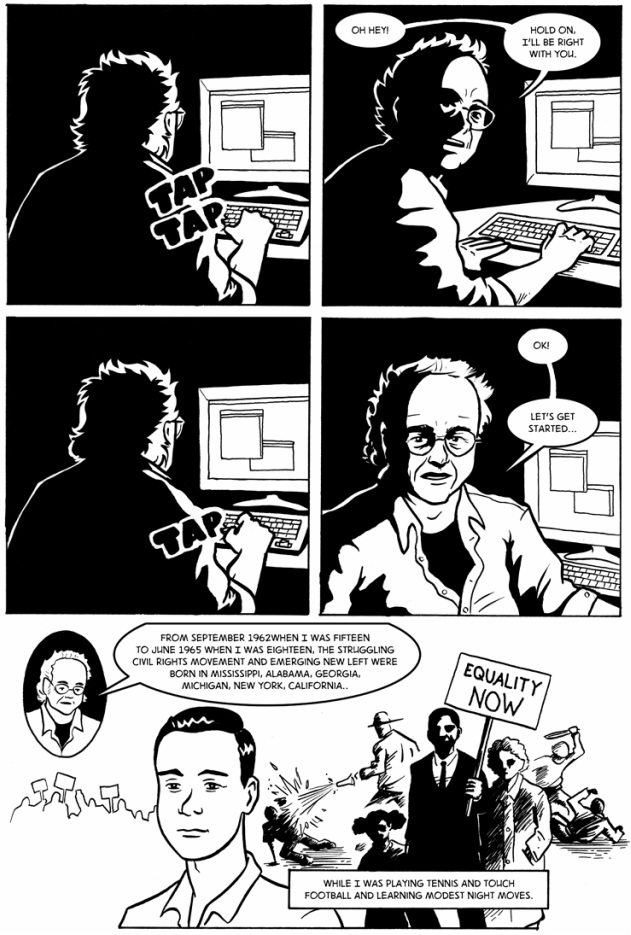 "As a primer on the history and theory of participatory economics, this title is never short on ideas, tracing the development of Michael Albert’s theories on self-management, social justice, and internationalism, and their origins in the civil disobedience and consciousness-raising movements of the late ’60s and early ’70s. As a student at MIT, Albert was inspired by the culture of activism to found Z magazine, ZNet, and the International Organization for a Participatory Society. Some readers may wonder why Wilson (AX: Alternative Manga) and Thompson (the webcomie Green Benches) have chosen Albert’s story for treatment as a visual narrative, and that treatment definitely makes some of book’s issues more palatable to a wider audience.

Artist Thompson is also very adept at marrying the literal and the symbolic to allow Wilson’s prose, and therefore Albert’s ideas, to resonate with readers. There are moments, though, when the book stalls and readers find themselves wading through lengthy, text-heavy panel sequences featuring shots of Albert discussing a given issue. Still, Thompson and Wilson can be very inventive with their effects. Parecomic is inspired at times, and as a treatise on participatory economics, it’s pretty great. As a comic, though, it’s just pretty good." - Publisher's Weekly

"Aspects of his personal, political, and philosophical viewpoints are well-balanced and presented skillfully through Thompson’s expressive illustrations... this is an accessible and serviceable introduction to the principles of parecon and the vision of one of its founders. Recommended for readers interested in alternative economic models and the legacy of the radical 1960s."
- The Library Journal

"Parecomic brought me back to a time in my life when I regularly thought through these ideas and concepts, a time when my brain was working over time with new ideas and connecting the dots. This graphic novel challenged me to think through new ideas as well as the world we live in. Even better it did so in a way I didn’t find boring or grating to read, much like some of the works referenced within it. Parecomic is a fine example of how far the comic medium has come. It’s no longer ruled by only heroes in tights, it’s now a tool in our greater understanding of the world and further education."
- Brett Schenker, Graphic Policy.

"Really enjoying reading it. I think comics bring something different to the experience. I was sitting in a cafe with my wife yesterday reading a comic book at 51yrs! Holding and reading a comic book makes you feel different... I guess comic book form has to be succinct and particular in what it chooses to impart to the reader. A difficult job I would gather. But truly enjoying it... I think you have done brilliantly and I will definitely be recommending the book to friends, even those not interested in activism." - James, IOPS member in Australia.

"As a Kickstarter supporter I received my complimentary copy of "Parecomic" and read it through over the weekend. Congratulations, you and Carl Thompson created a very readable, comprehensive and inspiring book. Presenting Michael Albert's background and the historical development of parecon and paresoc, and its relation to Marx and others, turns a subject that can be often perceived as dry and impenetrable into one that is fresh, comprehensible and insightful. Your graphic book is an accessible introduction into the important ideas of parecon and paresoc. Thanks!" - John, Kickstarter supporter


"If you want solutions rather than complaints then this is a must purchase book. It fascinated me, and I read it as I would read any Stephen King page-turner. That says two things. Firstly, that writer Sean Michael Wilson and artist Carl Thompson did a fantastic job, and secondly, that Michael Albert has a model of change that resonates with truth. Real change has to be economic change, not political rhetoric, and that is what is offered here. The ideas expressed within are world changing. If you have time for Batman then you certainly have time for this." - Mark Pritchard

"I admit that I was nervous when I finally sat down to read the whole book. But it was just my creaking bones worrying, I guess, because the book is incredibly effective, in my view, at creating a friendly path into the ideas it offers. Sure, one can read longer full text books on the topics to get longer full text renditions. But there is something about seeing the images along with the more succinct text that really does help communicate the ideas. Parecomic is fun to read, but no less informative and, I hope challenging, as a result." -  from Michael Albert himself, full view here:


Here is a short video we made about the book:
http://www.youtube.com/watch?v=dQqLW6R0F_4

Below are more pages from the book: