Author Talk
The Minamata Story: An EcoTragedy with  Sean Michael Wilson
at the Japanese Cultural and Community Center of Northern California

We did an enjoyable talk about our new book at The Orwell Society.

“Such, Such Were The Joys” is a new graphic novel adapted from Orwell’s famous essay. The novel will be launched at 6pm UK time on Sunday 7th November in a free online event organised by The Orwell Society which is expected to last one hour.

We will be joined by adapter Sean Michael Wilson and illustrator Jaime Huxtable to discuss their graphic novel. Orwell’s son Richard Blair will introduce the event and Les Hurst will discuss the importance of the essay.

The event was recorded and can be seen here:

Thanks for the folk at Leaf of Life for putting together this nice video looking at very large but almost totally unknown problem of tree destruction in Japan.

Of course most people in Japan still like nature, but there is a large problem in terms of the very significant decline in greenery in house gardens in cities. Awareness of this needs to increase, since it is directly contrary to the image of Japan. Hopefully in the future, as appreciation grows regarding the need to protect the environment there will be a change in what has been happening and it will become normal for trees to be replanted in new houses in Japan. That's why I'm focusing on this issue in my various articles and this video is just the latest in that effort.

私達の漫画本が、今週土曜日)(2月9日)・テレビ福岡にて紹介されます。番組名は「おとななテレビ」、18:30～20時、TVQにて放送です。
Myself and our manga books were on TV in Japan Saturday, the 9th of February, on “Otonana TV”,  6:30 pm-8:00pm on TVQ station. I think thats the first time I've been on 'primetime' TV
Nice! 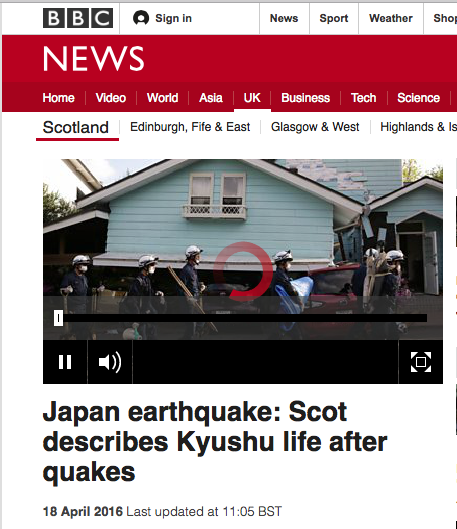 ​I did several media appearances about the terrible Kumamoto earthquakes in 2016, since I was right in the middle of that, including for the BBC, The Telegraph, Herald Scotland, US radio and the Japan Times. This is an easy link to the contribution I made to a BBC programme:
http://www.bbc.com/news/uk-scotland-36056904

TV documentary I wrote and presented in Japan
A 13 minute documentary about Miyamoto Musashi's life in Kumamoto, that I presented for Amakusa TV, a television station in Japan 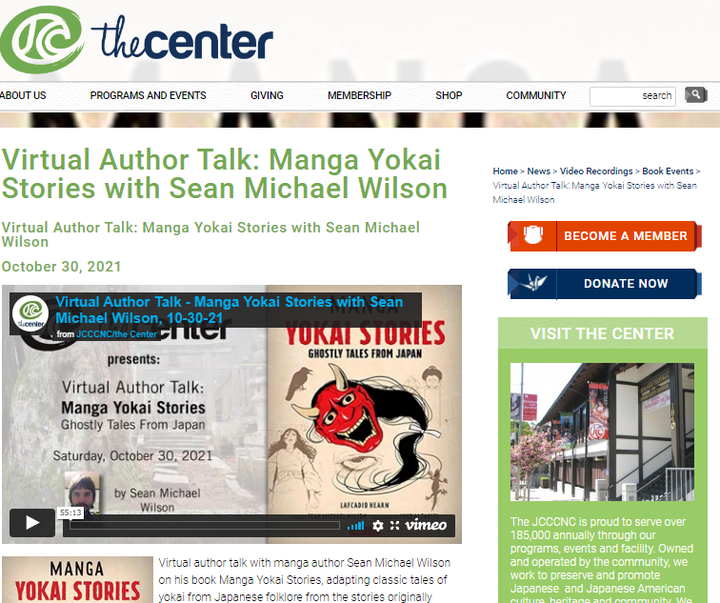 Being interviewed about my books for a youtube channel in Thailand. ขอบคุณครับ!
Mentioning Alan Moore as an influence, our new book Tao Te Ching with Cark Kwok, our Japanese history books with Akiko Shimojima...and my childhood autobio book, with Hannah Stromberg.
Looks cute to see my words translated into Thai, and thanks to the interviewer, Minn, who was a bit stressed about having to speak English, but she did pretty well.

​Enjoy a reading of the ghost story, "A Dead Secret" from the book, Manga Yokai Stories by Sean Michael Wilson, a collection of manga adaptations of classic tales of yokai (spirits) from Japanese folklore.

​Radio Interview 2019
I did this interview for a radio station in Chicago, the windy city (is it actually windy there?).

https://www.mixcloud.com/lumpenradio/eye-94-1-27-2019-sean-michael-wilson/
​
Podcast 2018
Self titled ‘Two Gay Geeks’ in America and one Socialist Scot in Japan…talk about comics and anything else.
That’s diversity fer ye... 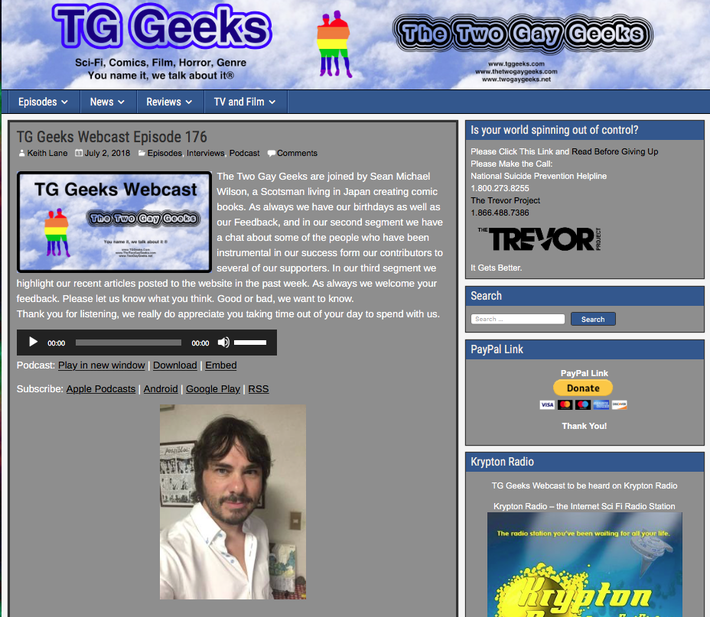 ​Music
As well as my love for comic books my other deep interest, since i was a teenager is 1960s music. I've been DJ-ing it for many years and still do - just for the love of it. all types - psychedelic, northern soul, garage-punk, 60s pop, mod, folk rock, etc...

I also love singer song writers stuff, especially Scott Walker, Joni Mitchell, Van Morrison,etc. Any even the occasional more 'recent' bands like The Fall, The Jam, Primal Scream, etc....Huh, thats recent? It is to me! Especially considering that the quality of popular music since the mid 90s has taken a historic nose dive. Yes, it has. Just admit it!

Music has inspired me a lot and widened me as a person, and influences the writing that I do. 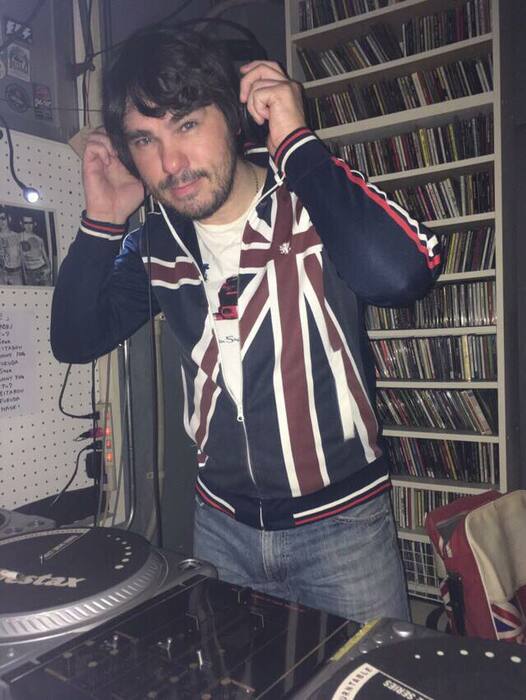 Video
​I decided to make 4 short videos in a series, of me giving a brief account of all my books so far, from 2003 to now. Nice! 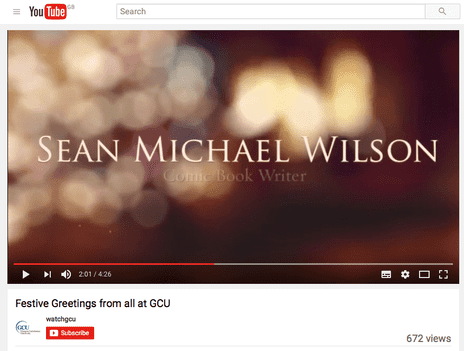 ​I'm part of the festive video message organised by Glasgow Caledonian University, where I did my undergrad degree. From their staff and various famous graduates, including Alex Ferguson, that pair from the excellent 'Still Game' Scottish TV programme, yer man David Farrell from STV Glasgow and a whole bunch of other good folk...

And Glasgow Caledonian University has a lot of interesting notable aspects: a female principal, a muslim chancellor (the first non-British international figure to hold the office of University Chancellor in Scottish history), old workling place of PM Gordon Brown and footballer Pat Nevin, the president of Iran was a student there, as was comedian Kevin Bridges...Nelson Mandella and writer Mark Miller as honourary graduates...when i was there its student union was one of the main gig places in Glasgow, with bands like Primal Scream and The Pastels... and its motto is 'For the Common Weal' - a good old socialist motto there!

Peter Cook - At a Slight Angle to the Universe
A TV programme about the late, great, comedian Peter Cook, who I find fascinating.
Derek and Clive parody with my mate Andy. 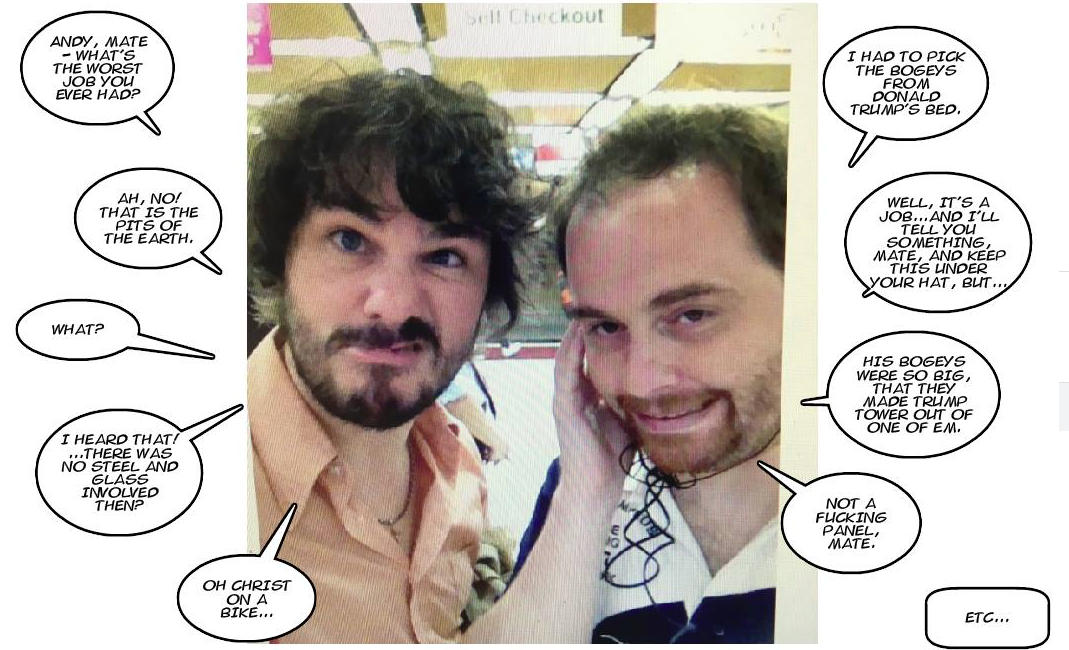 The Who
The greatest rock n roll band ever?  A lot of people think so and I adore them more than toast and tea. Certainly they made some VERY good songs. And this is one of them, from 1971:

My first interview in Italian, in an excellent digital magazine for ipad, COMX DOME. Which includes this video of me (and one by Dave Gibbons too), alongside lots of other great stuff - and it's free:

https://itunes.apple.com/it/book/comx-dome/id585317968?mt=11
Videos
Below- a little 'flip through' video of our Bushido book made by the publisher,
and also the Spanish version of our book 'The Faceless Ghost'.
Nice! 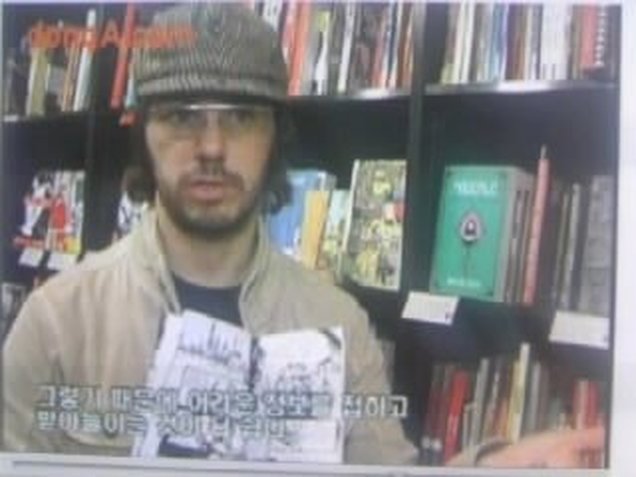 ​I did a televison interview for Reuters news agency about our book on IRAQ, and to my surprise it was picked up by news shows all over the world, including Turkey, Russia, China. This is a photo of the interview being shown on Korean TV.

From 1997 to 2004 (before returning to focus on comic book making) I made a series of films with my business partner, camera man Alex Rupprecht.

A list of my film, video and TV work:

2015 - Writer and presenter of a 13 minute documentary film of the life of Miyamoto Musashi, for Amakusa TV.

2009 - Extra on a film with Japanese actor Toshiyuki Nishida (Pigsy in the Tv series Monkey Magic), Clouds over the hill, TV series broadcast NHK 2009 to 2011. Playing a western soldier in Meiji Era.

2007 - Reuters News Interview, discussing my book on Irag, shown in several countries, including CCTV in China, and Al Jazeera Television.

2004 to now - many appearances in conventions in the USA, UK, and Japan; also on radio, podcasts and in magazines discussing my books.

2001 - Wrote and directed the documentary film 'The Japanese Invasion' for the Japan2001 festival.

2000 - Wrote and directed the documentary film for Channel 4 television in the UK, 'New Mod Generation.'

2000 to 2005 - Extra actor on several film and TV projects in the UK, including The Biography of Peter Sellers, a James Bond movie, Eastenders etc and including working alongside such actors as Geoffrey Rush, Daniel Craig, Martin Kemp and Rupert Everett.