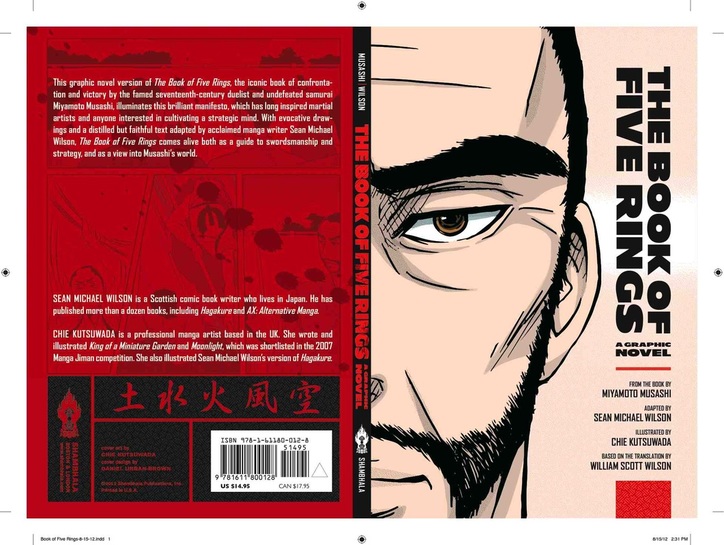 My second best selling book so far. We tried to do this one in a rather more experimental style than the connected book, Hagakure. Our manga version of The Book of Five Rings has a lot of beautiful, symbolic visuals in it as well as telling the story of Musashi in a dignified, graceful fashion. (oh, jibun de ita!)

"This manga version of Japanese classic The Book of Five Rings, the iconic book of confrontation and victory by the famed 17th-century duelist and undefeated samurai Miyamoto Musashi, reinvigorates the classic, making it more accessible and appealing to a wide audience. With atmospheric manga art by Chie Kutsuwada (Hagakure, Romeo and Juliet, etc) and a fluid script adaptation by Sean Michael Wilson (A Christmas Carol, AX anthology, etc) the manga version works both as an engaging visual guide to Japanese swordsmanship and strategy, and as a view into Musashi's world. A fascinating book for manga fans, martial art fans and anyone who wants to apply the timeless principles of this text to their lives."

"This graphic novel version of The Book of Five Rings, the iconic book of confrontation and victory by the famed seventeenth-century duelist and undefeated samurai Miyamoto Musashi, illuminates this brilliant manifesto, which has long inspired martial artists and anyone interested in cultivating a strategic mind. With evocative drawings and a distilled but faithful text adapted by acclaimed manga writer Sean Michael Wilson, and based on the translations of William Scott Wilson (recipient of the prestigious 'Order of the Rising Sun'), The Book of Five Rings comes alive both as a guide to swordsmanship and strategy, and as a view into Musashi’s world. Miyamoto Musashi, who lived in Japan in the 1600s, was an undefeated dueler, a masterless samurai, and an independent teacher. He spent the last decades of his life refining and teaching his military science." 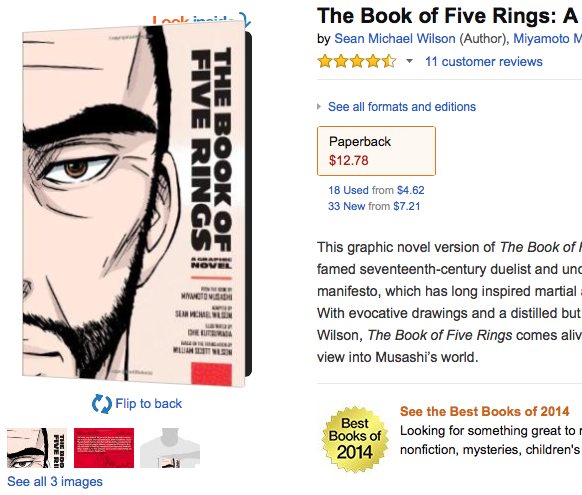 In one of the best and most insightful reviews I've ever had a martial arts expert gives a thorough analysis of two of our books and thankfully finds that they please him:

"Sean Michael Wilson is the writer responsible for adapting Musashi’s work into graphic novel form (based on William Scott Wilson’s translation). Displaying a great deal of respect for and knowledge of the original work, he has managed to boil it down to its essentials. Some concepts just don’t lend themselves to visual form, but here the text is greatly enriched by the illustrations. It would be interesting to find out how closely Wilson worked with the artist and how much of the symbolism and visualizations came from him. We’re guessing it was the majority. The finished work is multilayered and will yield greater insights with each reading. In fact, it DEMANDS to be reread. Make no mistake, this is no simple comic that can easily be blown through in a few minutes and then forgotten."
- The Shoguns House
http://www.theshogunshouse.com/2013/08/a-graphic-approach-to-musashi-and.html

"This graphic adaptation of Musashi’s 17th-centurytreatise on the martial arts makes careful, effective use of imagery to emphasize both the narrative and instructional aspects of the original text... scripter Wilson and artist Kutsuwada finding terrific visual and dramatic hooks as background for Musashi’s alternately anecdotal and didactic text...The final chapter, “Emptiness,” is particularly intriguing, with its Zen-like call for awareness of what we do not know as a way to avoid detrimental confusion. Kutsuwada’s art is delicate and clean, balancing the physiological dynamics of swordplay with a clear-eyed appreciation of Musashi’s natural environment. An engaging, thoughtful update of what could be esoteric." - Publishers Weekly

"Writer Sean Michael Wilson and artist Chie Kitsuwada deliver a stately and respectful adaptation of this classic work that is a truly a tribute to the original... complex themes to be conveyed in fascinating ways...Kitsuwada's style is wonderfully resonant of Japanese art and design, and is often tremendously creative. That's particularly true in the end section that discusses the theme of nothingness in a cleverly symbolic and oblique way that made me smile hard at its matter-of-fact cleverness... Interesting, almost playful scenes like those show that this book isn't dry" - Jason Sacks, Comics Bulletin.

"At times terrific. The only reason I didn't give this one 5 stars is the uneven quality of the art. Before "Book of Five Rings" I read the manga adaptation of "Hagakure" which was created by the same team. According to the copyright dates (2012 vs 2010) "Hagakure" was published two years earlier. Which to me means everyone involved had time to give extra polish to their skills. I like W S Wilson's translations of both, and S M Wilson (no relation) did a good job with the adaptations of both. And for the most part, C Kutsuwada's art is very good - at times, stunning even. With the glaring exception of the horses! People, landscapes, buildings are beautiful. Other animals are drawn quite well. But the horses in "Book of Five Rings" are just godawful. Really, really monstrous. So much so, that it's hard to believe they are the work of the same artist. Which in itself is no big deal I suppose, except that it interrupts the otherwise smooth and enjoyable flow of the book, detracting in a jarring way from what is otherwise a great read. Even so, I recomend this one- just ignore the horses! " - Amazon 4 star reviewer (with a interesting fixation on horses!)

"Sean Michael Wilson expertly puzzled a graphic novel together from text fragments and thematic and symbolic visualisations of Musashi’s detailed overview of his view on martial arts, the philosophy of his own Niten Ichi-Ryu, the strategies of other martial arts and swordmanship schools and his frame of meditation." - Bart Croonenborghs, Broken Frontier

"I have read, listened to, and otherwise studied many versions of Miyamoto Musashi's Book of Five Rings of the past 20 years. And to be honest, I'm frequently very picky about the way the Book of Five Rings is presented. But as of right now, Wilson's translation is my favorite, and I absolutely love the Manga/Graphic Novel style of this book. I feel the integrity of the original work has been maintained, and the art is excellent!

If you have wanted to study the classic in a more visual medium... this is the book for you. If you have never read the Book of Five Rings because it seemed too dense or inaccessible... this is the book for you. If my wife would let me... I would get a poster sized version of the page with Musashi's 9 rules (from the Earth chapter) and put it on our living room wall. I am very happy to see Musashi in visual form. Each time a student comes back to valuable teachings... new and deeper understanding can arise... but this book was something special. It has completely reignited my interest in martial arts and Musashi."
- Benjamin Langley, Amazon 5 star review

"I particularly liked the ending: The Book of Emptiness. As the chapter progresses, the pages get emptier and emptier, with more and more white panels between the action. Perfect for a chapter titled Emptiness. I also appreciated the detailed afterward. I am one of those people who wants more context and explanation to her books and I always love an author’s notes."
​- Emma Weiler, No Flying, No tights web site 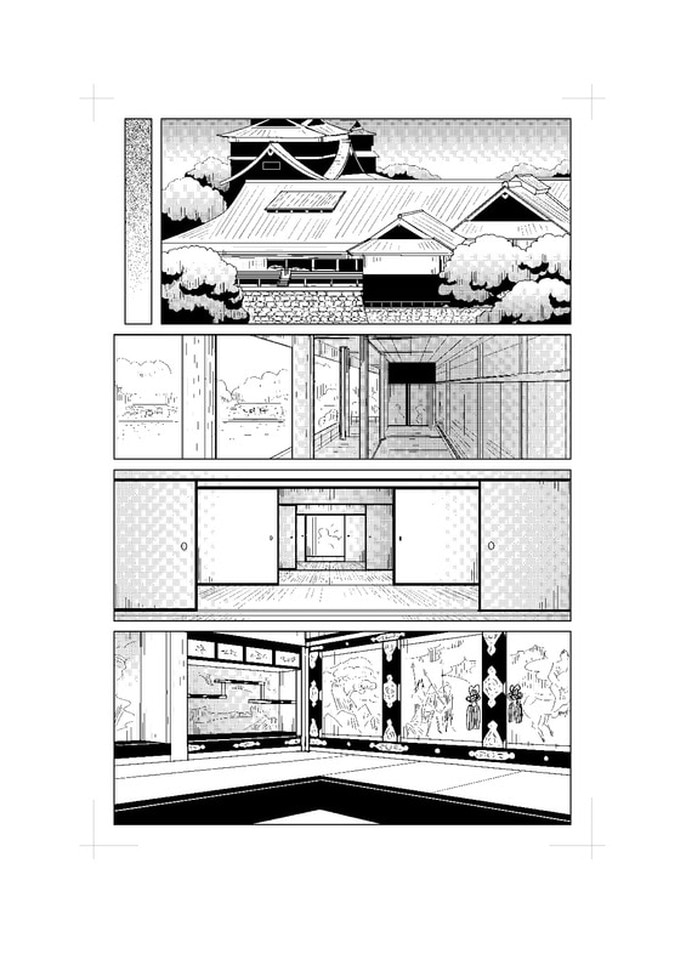 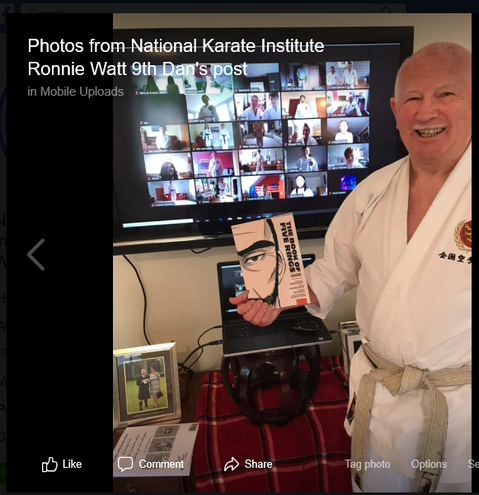 Nice to see our books being used by yer actual martial arts people. In this case an esteemed karate sensei in bonnie Scotland, Ronnie Watt. 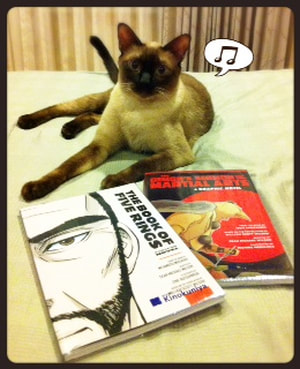 I was sent this photo from a lady in Bangkok, who's Siamese cat clearly has good taste in manga.

Our books THE DEMON'S SERMON and THE BOOK OF FIVE RINGS 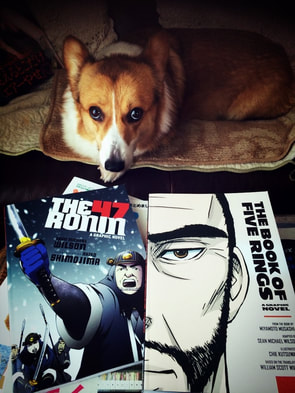 And another reader sent this of their Dog in Japan, Sora-kun. Eigo jozu ne! 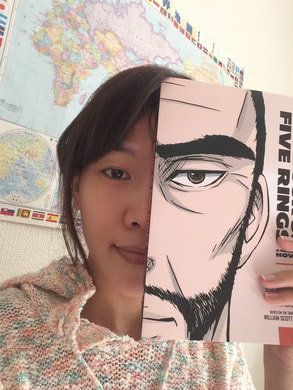 And from Vietnam - this lady is having an identity crisis!
The official press release:
http://www.animenewsnetwork.com/press-release/2012-09-21/the-book-of-five-rings/a-graphic-novel-now-available-for-order-from-diamond-september-2012-previews-catalogue

A long article with various images I wrote on the book for Forbidden Planet web site:
http://forbiddenplanet.co.uk/blog/2012/directors-commentary-the-book-of-five-rings/ 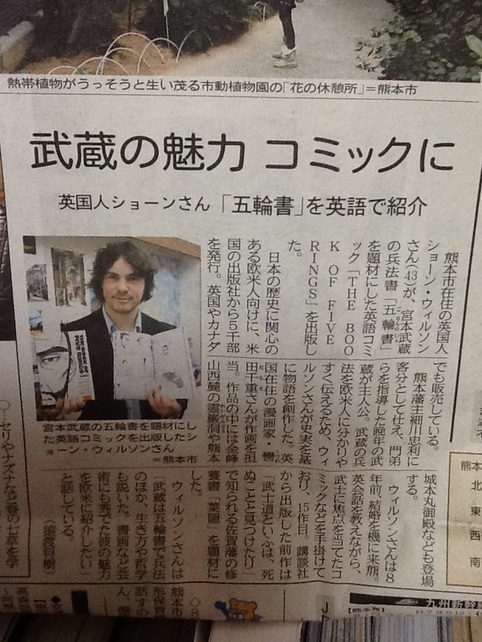 This is an article about me and the Book of Five Rings in the Japanese newspaper KUMAINICHI, from Jan 7th, 2013.

Basically this article says: "Sean is British (it actually uses the kanji word which most people think of as meaning 'England', but is also used to mean the whole of the UK, which is of course not good for me as a Scottish man!). He has written a manga book about MIYAMOTO MUSASHI, called THE BOOK OF FIVE RINGS, as Musashi is an interesting samurai from old Japan, who mixed philosopy with fighting skills and also an artistic attitude. The book is by an American company, with art by Chie Kutsuwada. Musashi lived in Kumamoto (this town) and he wrote the book here."