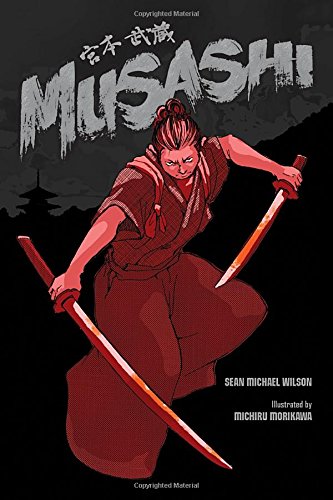 A book that looks at the life of legendary warrior poet, Miyamoto Musashi.
NEWS: Recently optioned for development as a movie.

Published by Shambhala Publications in the USA. This is my fourth historical, samurai Japanese graphic novel published with them, and my seventh overall. And as there are four more in the pipeline it will get to a total of 11 such books out by 2016. Sorry to blow my own horn, jibun de ita, as they say in Japan, but I think this is unprecedented - it's the first time that a British comic book writer has made a such a long series on  historical, samurai Japanese themes, working directly with Japanese artists.

The artist on the MUSASHI book is Michiru Morikawa, and she has done a wonderful job. Especially on the later chapters, where there are various 'silent beauty' pages with little or no text - some of her art on those is very beautiful. Lovely stuff.


​Listed as No 1 on the best seller list on amazon in it's specific group, 'Educational and Non-fiction Manga'. Number 2 on that list is Shigeru Mizuki's book 'Showa 1939 - 1944', which is a very impressive book and good company to be in.

"Miyamoto Musashi, the legendary samurai, is known throughout the world as a master swordsman, spiritual seeker, and author of the classic Book of Five Rings. Acclaimed manga creator Sean Michael Wilson has created both a vivid account of a fascinating period in feudal Japan and a portrait of a courageous, iconoclastic samurai who wrestled with philosophical and spiritual ideas that are as relevant today as they were in his time. For Musashi, the way of the martial arts was about mastery of the mind rather than simply technical prowess.  Over 350 years after his death, Musashi still intrigues us—and his Book of Five Rings is essential reading for students of all martial arts and those interested in cultivating a strategic mind."

Get the book here:
http://www.amazon.com/Musashi-Graphic-Novel-William-Wilson/dp/1611801354

As with all these books we chose to try for a subtle, sophisticated version, rather than one that exaggerates the fighting, sex and glory. Therefore, all the fights are shown in a realistic way, and are over very quickly - as that is what happens in practice. Now of the stupid hollywood fights that take ten minutes and have folk jumping all over the room. Musashi would have looked with scorn at such antics. Likewise, the attempt at historical accuracy is considerable. My 'Uncle in America', the esteemed translator and researcher, William Scott Wilson, provided a lot of the research that the graphic novel is based on. Plus my own visits to the actual places that Musashi lived, fought and died. It seems that some readers dont seem to understand why we are not taking a BANG-FIGHT-SEX-WAAAA! approach to these books. So, we hope that you lovely enlightened readers can appreciate the effort we have made to make a more measured, subtle, accurate graphic novel about the life of Miyamoto Musashi.

Below is a short programme about Musashi's life in Kumamoto, that I presented for Amakusa TV, a television station in Japan
Sometimes you get reviews or messages about your books which are rather touching. A lovely guy sent this to my twitter: 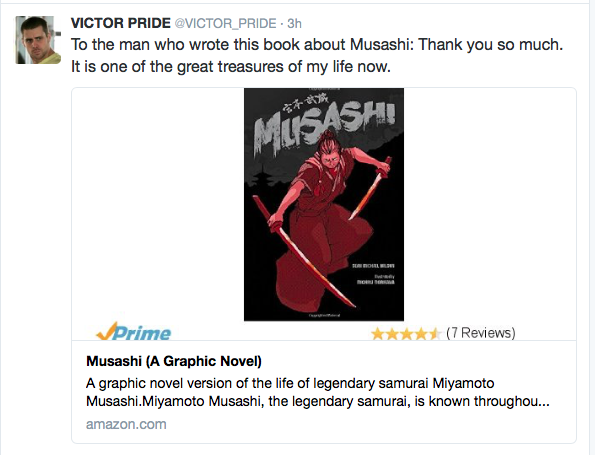 "The writing is very good and overall has a good pace. Biographical stories have a tendency to have a weak ending due to following the person’s life so closely, but Sean Michael Wilson manages to make this ending rewarding and the right closing for the story...Michiru Morikawa brings the story to life with his illustrations. His [actually HER] take on Mushashi is distinct and unlike anything else you’ve seen before. Morikawa gives the action a wonderful presence as it’s dynamic and yet easy to follow...If you’re into Samurai’s, swordplay or history; then you’ll definitely want to check out Musashi."
-  Dustin Cabeal,  comicbastards.com

"The nine chapters relate the various stages in the life of Musashi, including his most famous battles. Even though I had read much about Musashi in other books and articles I still learned a lot of other information on Musashi reading this graphic novel version. Musashi was not only an undefeated swordsman, fighting sixty duels, but was also an accomplished and respected poet, garden designer, and Zen master... If you are into the martial arts this is a book that should be in your personal library, along with his “The Book of Five Rings.” A beautifully fully illustrated book. Rating: 5 Stars."
- Joseph J. Truncale (Author of The Samurai Soul: An old warrior’s poetic tribute).

"I bought one book from Sean Michael Wilson (The Book of Five Rings) and then ended up buying three more lol! This is nicely done. It's a nice intro to the subject of Musashi and I genuinely enjoyed reading it. It's not all encompassing, but you get a nice slice (pun intended) of what his life was like back in the day. It's written in a low key, down to earth manner (which I liked), and I also enjoyed the artwork. I would add, for The Book of Five Rings, I bought the ebook version; however, for this type of genre, hard copies are much better. For a couple of £'s extra, it's worth getting the real book over the digital version. For other three items, I bought the hard copies. I'll review them after I've read them. Overall, thumbs up."
-Amazon reviewer, Dave D

“Based on William Scott Wilson's biography The Lone Samurai: The Life of Miyamoto Musashi (Kodansha, 2004), this work includes much historical material. The detailed black-and-white artwork provides a strong sense of the era. Well-drawn facial expressions and body language convey emotions in the often wordless art panels. Duels are very brief, often happening off-panel and there's no gory violence. The author aims for "accuracy and subtlety." Pacing is deliberate, examining milestones in Musashi's life. The man himself remains enigmatic, shown speaking in only a few panels. Readers expecting only duels and bloodshed will be surprised by Musashi Miyamoto's disciplined, meditative qualities. This dichotomy of developing technical skills with sword as well as an enlightened and philosophical mind will appeal to fans of Star Wars's light-saber wielding Jedi and their Jedi way. Recommended for graphic novel collections where more literary volumes circulate."
- June Shimonishi, School Library Journal


"Morikawa's art, with its atmospheric compositions, gives the book a feeling of dignity and grace. Wilson and Morikawa also do a good job conveying Musashi's strategies even in short, two- to three-page fight scenes... as a one-volume introduction to the real historical figure, this is a very fine synopsis."
- Jason Bradley Thompson, Otaku USA


Scroll down for more pages from the book: 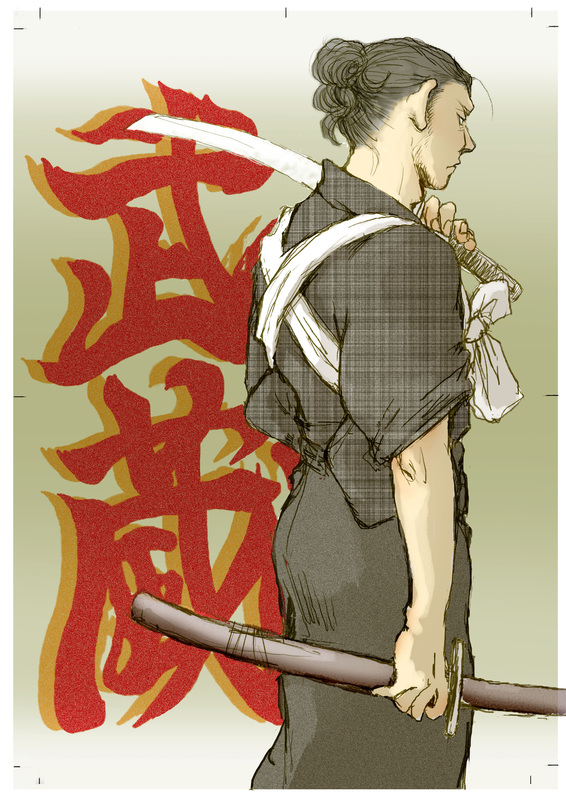 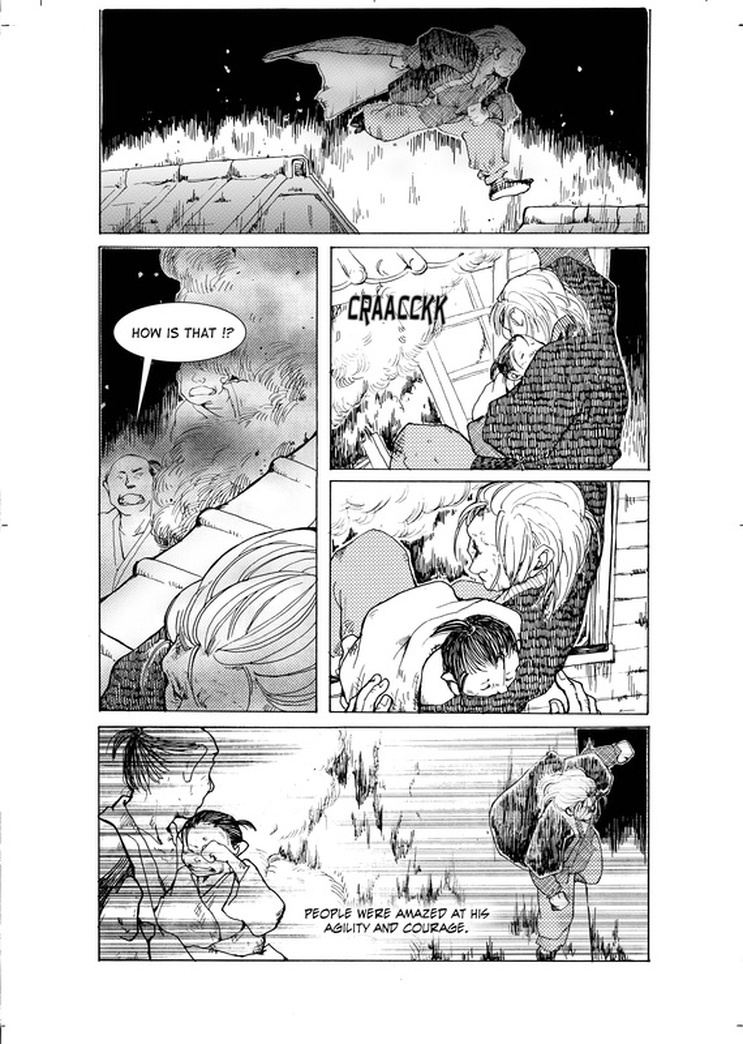 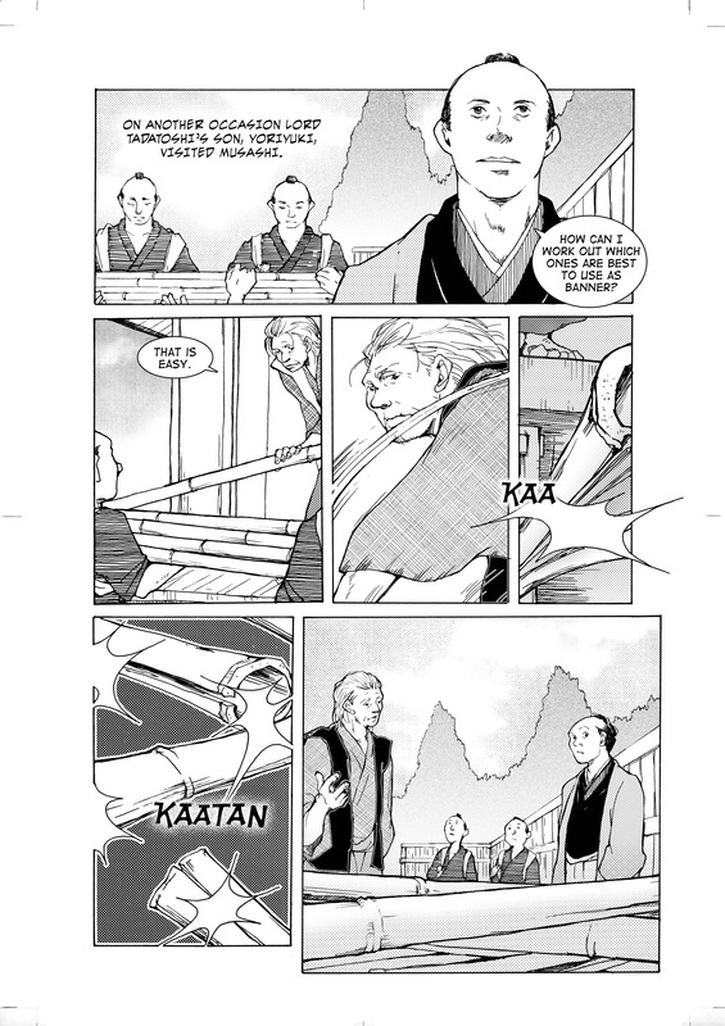 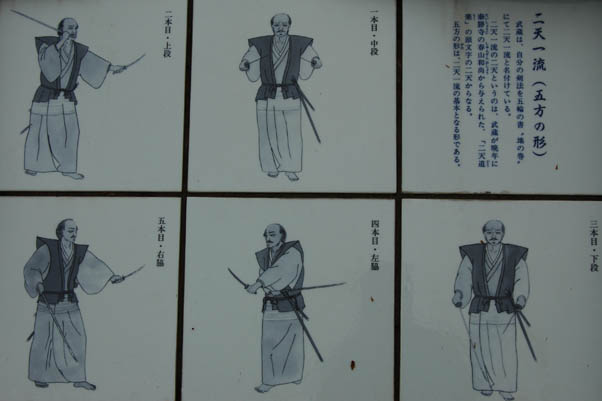 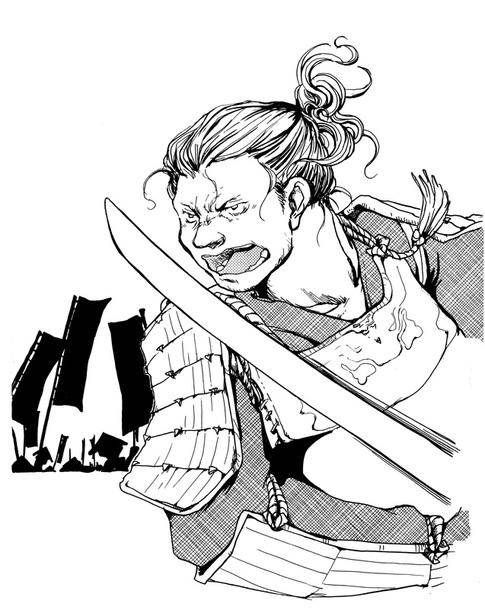 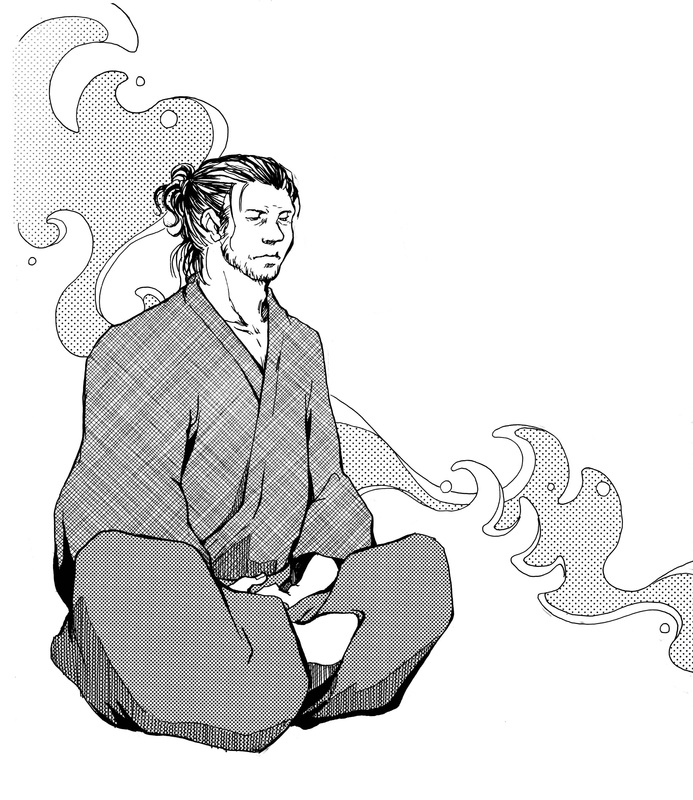 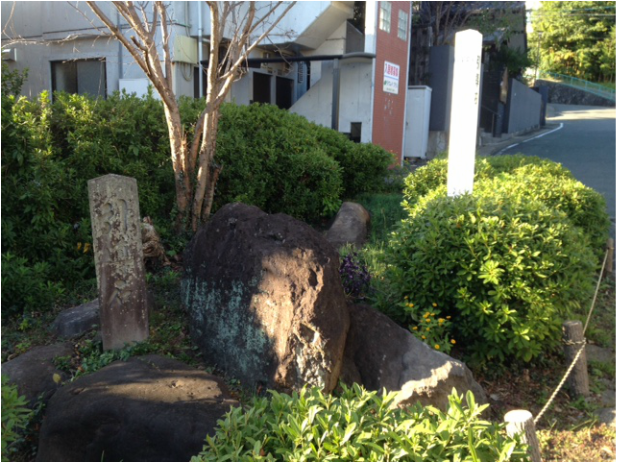 I recently discovered that a quite important 史跡 shiseki historical site is at the end of the road from me, here in the 黒髪 Kurokami part of this town. Its the place where a ritual took place in the carrying of Musashi's body from 千葉城 Chiba Jo (an old castle in Kumamoto, not the one actually in Chiba), where he died, to 武蔵ヶ丘 Musashigaoka, where he is now buried. I believe that the men carrying the body were also changed over at this place. As I only just discovered this site last week, (despite walking past it several times!) its too late to add in into our MUSASHI manga.

AND, an interesting article in a 熊本城 Kumamoto Castle booklet shows the site of the OLD 坪井川 Tsuboi river (the meandering river starting at the left of the image) ... and where the NEW river was redirected to in the 17thC (in the middle, the more straightened out river as it currently is). As it goes, the residence of Musashi was probably right IN the middle of the current river, since in Musashi's day that was dry land on the river bank. Two white pole 印 shirushi markers are there now, one of the right side and one on the left side of the river. Our MUSASHI book shows Musashi teaching his student by the Tsuboi river side. Why not buy a copy. 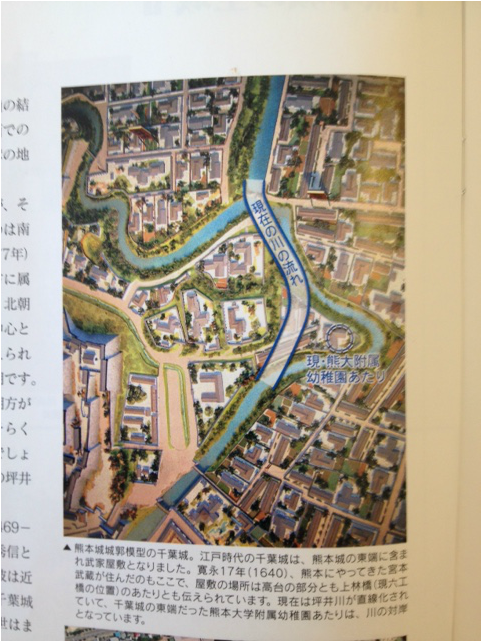