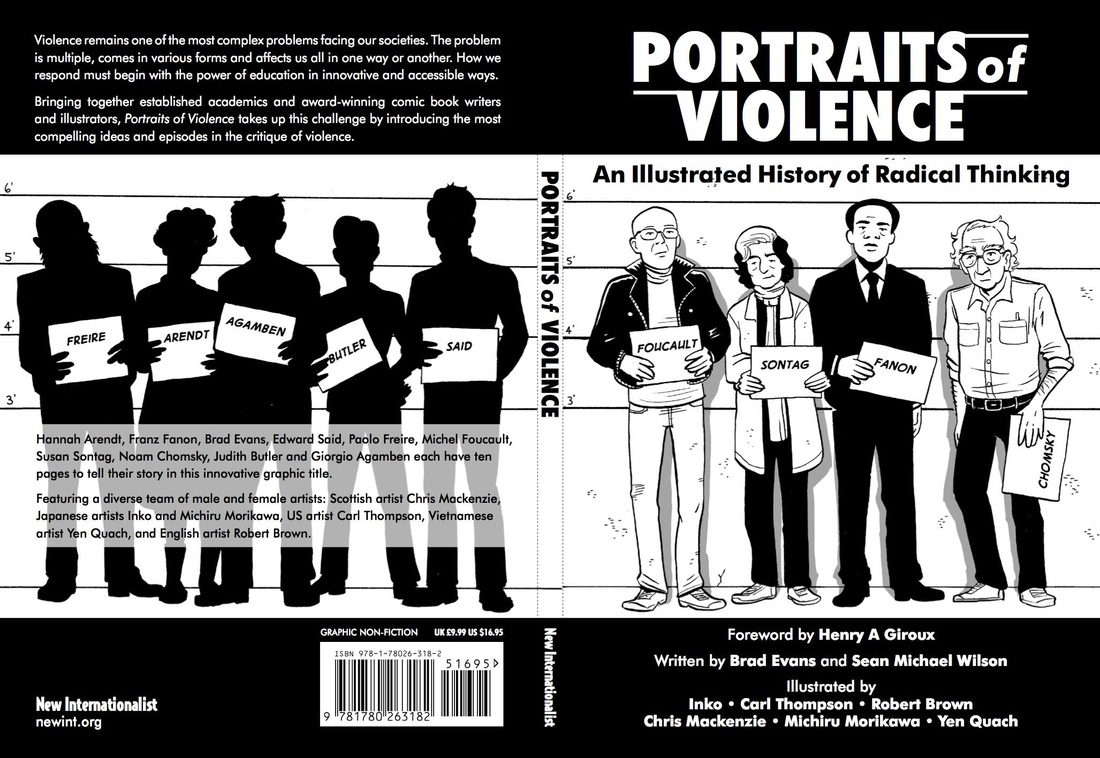 A collaboration between: Sean Michael Wilson and Dr. Brad Evans
​(Director of the History of Violence Project, Bristol University)

A documentary/educational style illustrated book about political violence, featuring 10 key thinkers around the issues of state violence, war, colonialism and terrorism...
​
Violence remains one of the most complex problems facing our societies. The problem is multiple, comes in various forms and affects us all in one-way or another. How we respond must begin with the power of education in innovative and accessible ways. Bringing together established academics and award-winning comic book writers and illustrators, Portraits of Violence takes up this challenge by introducing the most compelling ideas and episodes in the critique of violence.

That's my 2nd medal in the Independent Publisher Book Awards, and happy to get it. 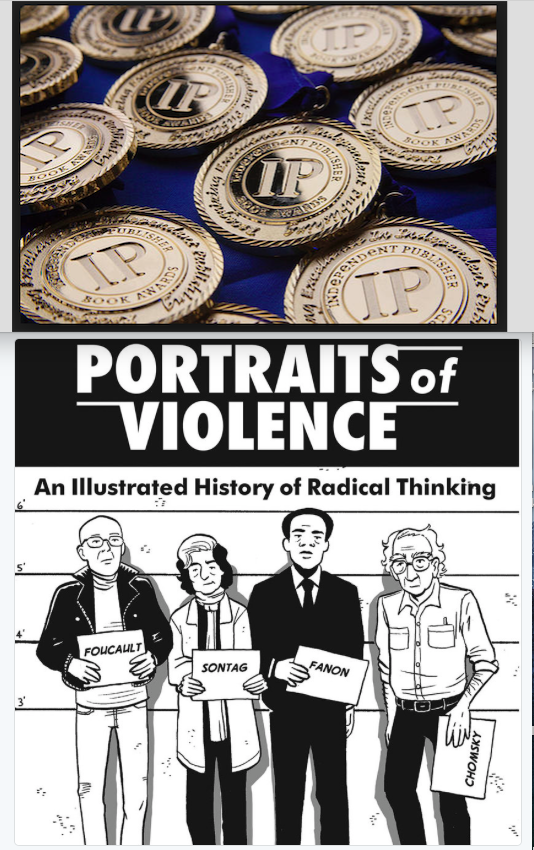 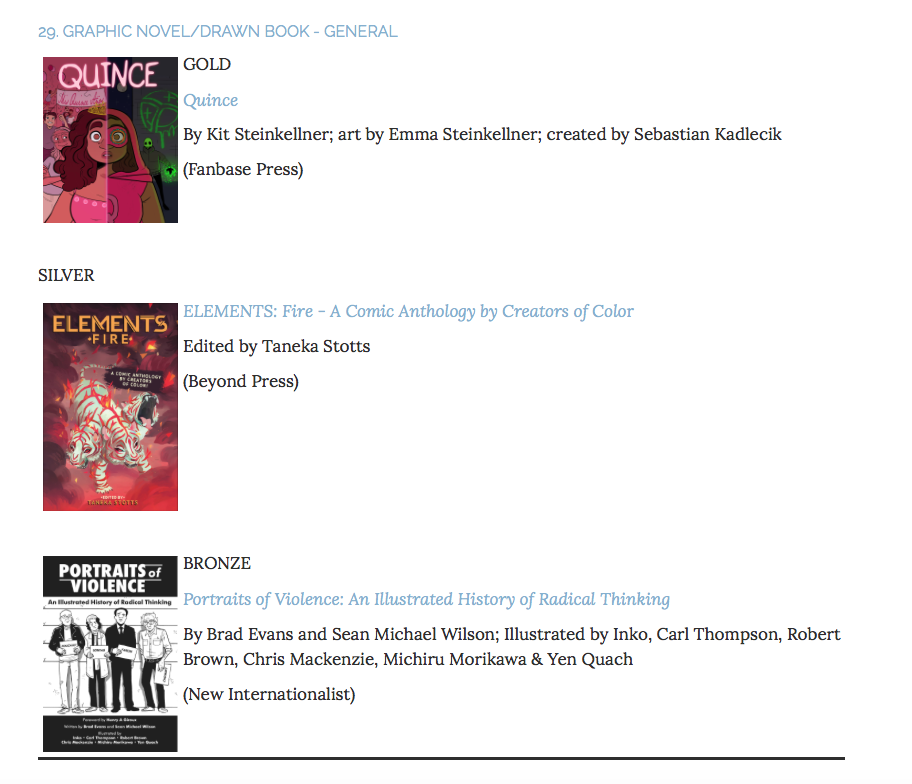 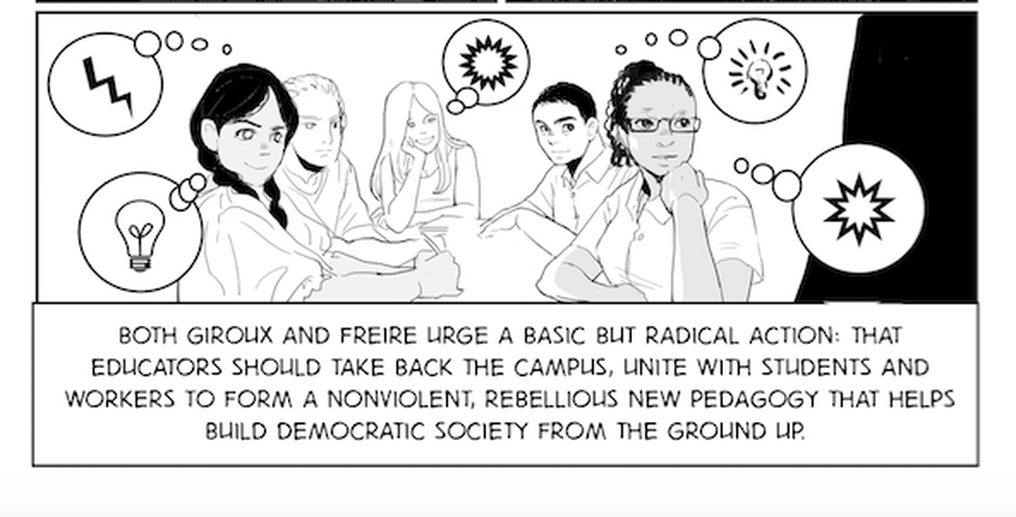 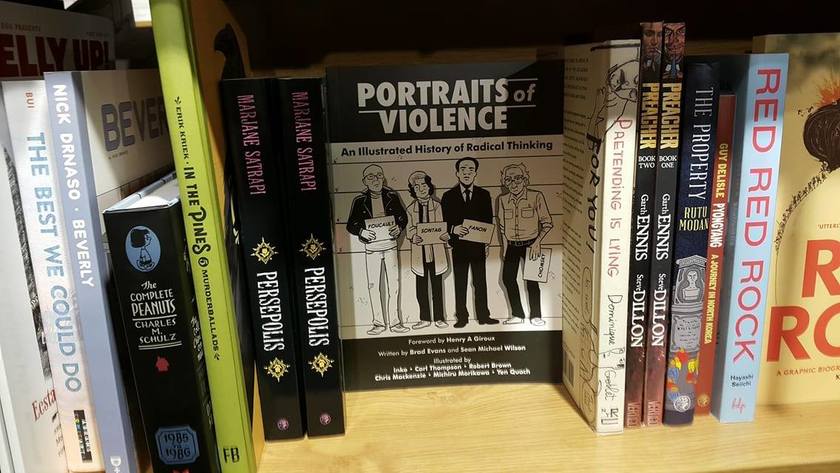 For folk in Canada, this group and the publisher 'Between the Lines', have a special Canadian version of our book Portraits of Violence.
"Founded in 1978, Brunswick Books is a national book marketing and sales company for Canadian universities and colleges. Over time our company has evolved – our mandate is to provide progressive books from progressive publishers to progressive people. Professors/Instructors in Canada: We will provide examination copies of our books for consideration as course texts."
​
http://brunswickbooks.ca/Portraits-of-Violence/​ 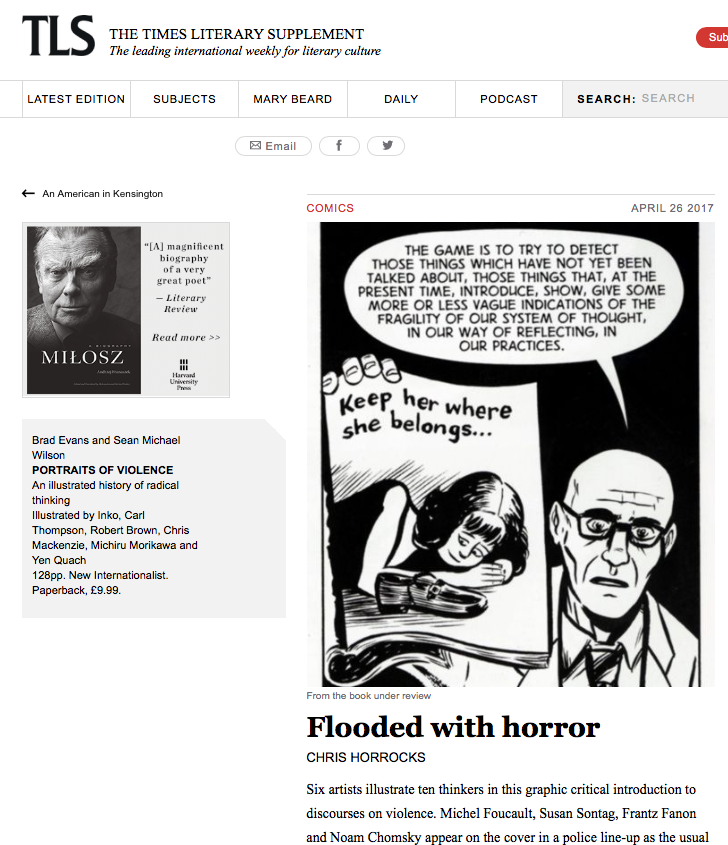 The book was reviewed in the The Times Literary Supplement, April 2017. That’s the first time this ‘august’ publication (“long been regarded as one of the world's pre-eminent critical publications”) has reviewed one of my books, so that’s nice. And it’s a long review too. 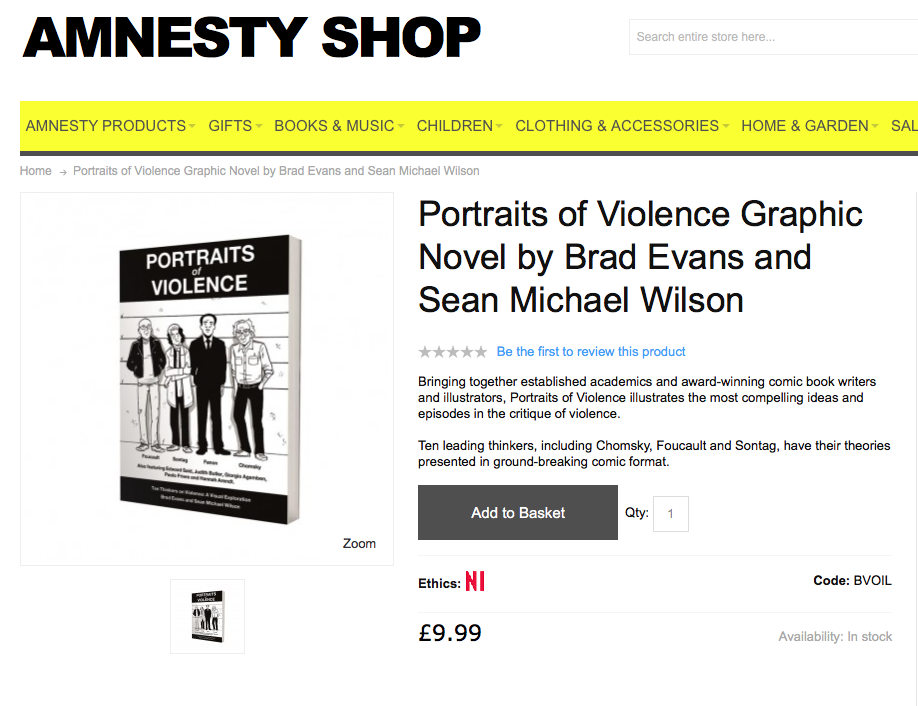 Click the image to get the book from Amnesty 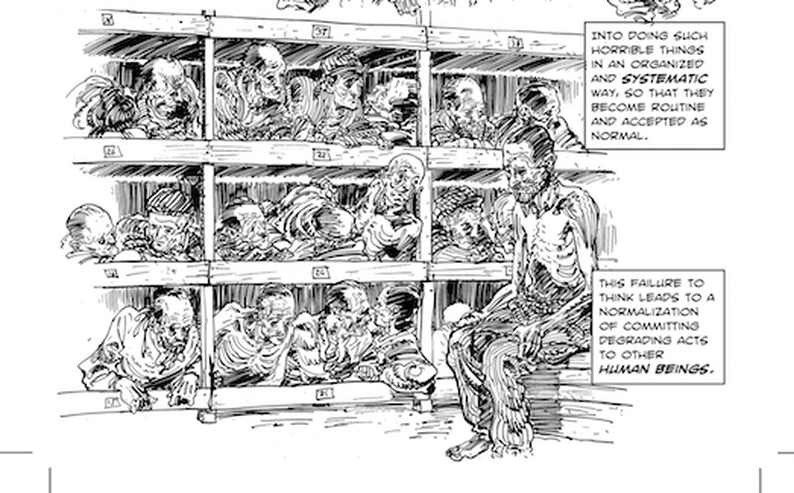 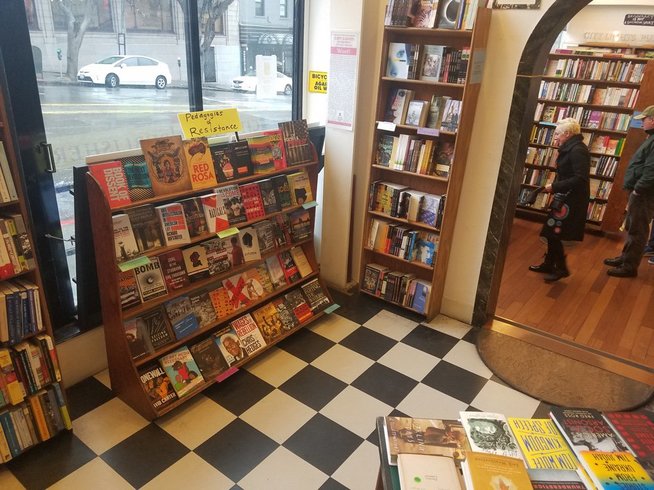 Great to see the book included in this impressive list, on the general area of popular resistance, at the legendary City Lights bookstore in San Francisco:

"Created in the wake of the November election, our newest bookstore section, “Pedagogies of Resistance,” is designed to act as an educational course in revolutionary competence. These texts build upon one another to highlight the motivations, ideas, successes, and failures that define past and present revolutionary movements in order to illuminate possibilities for current and future movement builders. "

Also featuring the graphic novel: 'Red Rosa: A Graphic Biography of Rosa Luxemburg'
​by Kate Evans and Paul Buhle
And such other great books as:
'Anti-Intellectualism in American Life' Richard Hofstadter
'On Revolution' Hannah Arendt
'Power to the People: The World of the Black Panthers' Bobby Seale 'Utopia' Thomas More
'There Is Power in a Union: The Epic Story of Labor in America'  Philip Dray

A great list to be part of and well done to City Lights for being ‘progressive’ minded enough to include some graphic novels.
http://www.blogcitylights.com/2017/01/11/city-lights-resistance-reading-list/ 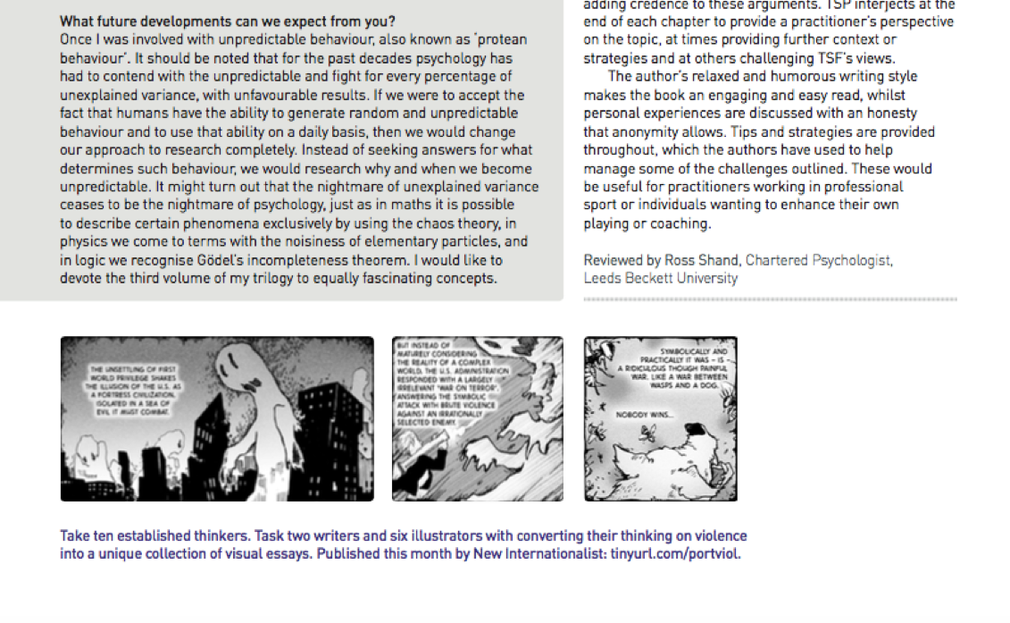 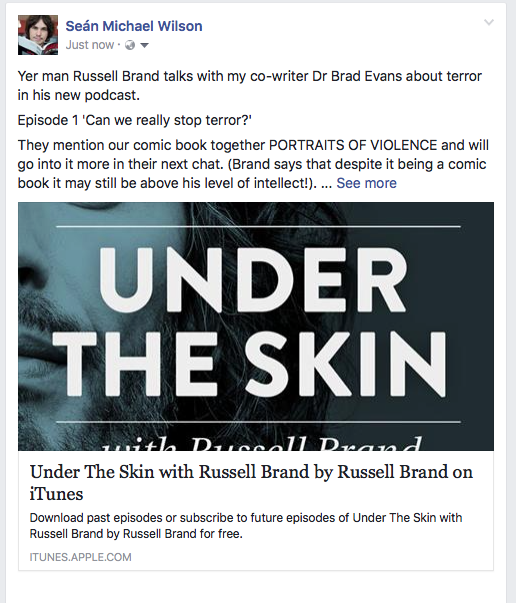 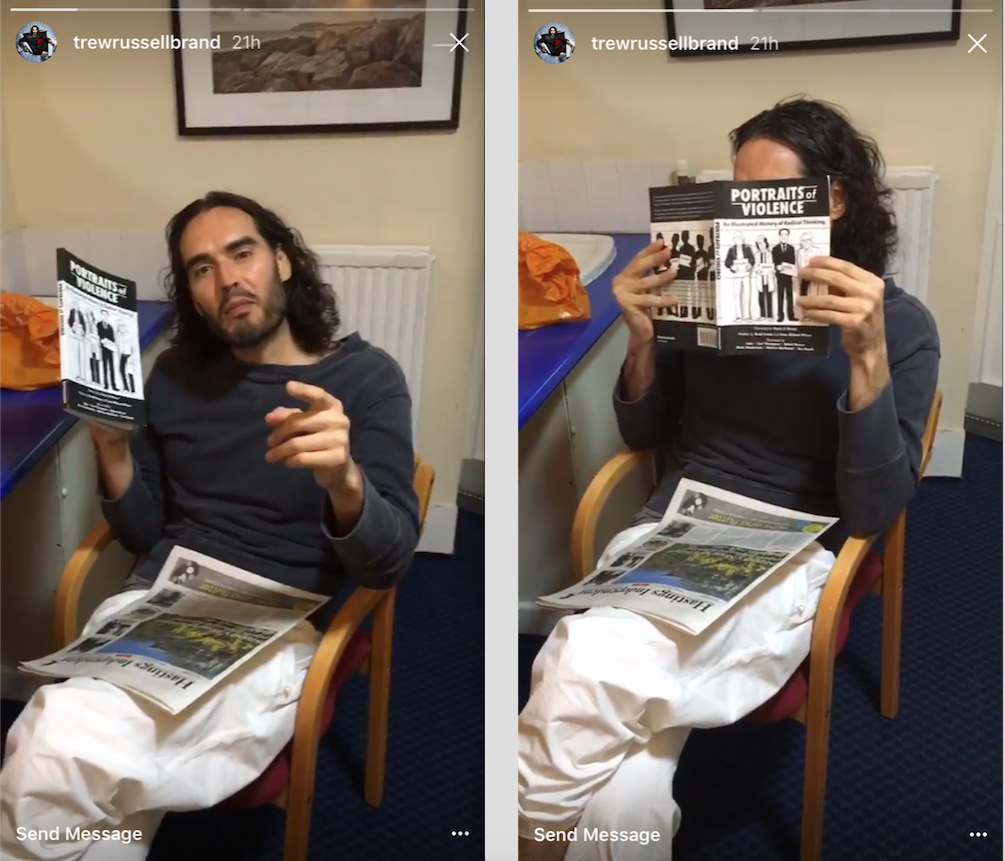 Russell Brand, on his instagram, reading our Portraits of Violence book. The man has good taste! 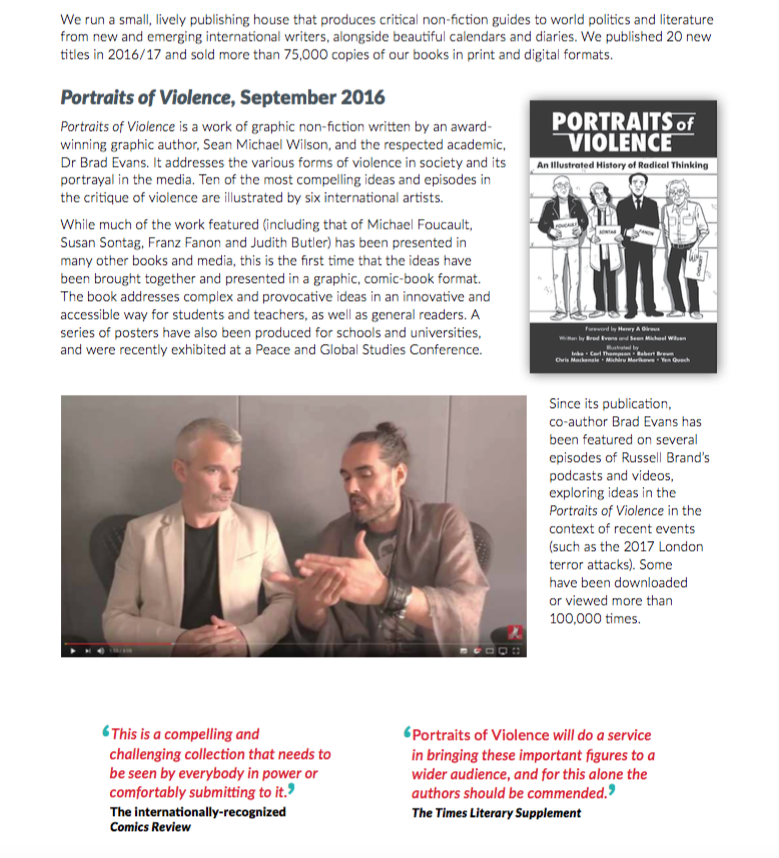 "Wilson and Evans have selected some of the most established academics on the subject including Noam Chomsky, Paulo Friere, Judith Butler and many more. In ten chapters, they present a fascinating examination on violence from these great minds’ many different viewpoints....Evans and Wilson’s passion on the subject strongly shines through making this collection a fascinating read whilst being a great showcase for diverse group of talents and offering varied discussion points on a very serious issue."
​- Leo Sutherland, Turnaround Publishers Services

"This book is a work of genius, a must-read for those concerned with contemporary pedagogical problems, the lack of critical thinking and the problem of violence... It stirs both the mind and the eye through figures and historical contexts portrayed each one in a particular and unique manner. The variety of graphic spaces and styles strengthens the authors' focus on the necessity to make qualitative life prevailing over the quantification of it, to make prevailing imagination and critical pedagogy over the bleak computational education typical of liberalism and determinism...this graphic non-fiction work makes clear in a very intelligible way that for an educational and political shift it is crucial to intellectuals, common citizens and the youth not to be uncritical and apathetic witnesses but to cultivate social inclusion and to conceive politics as a creative process, moreover, as Henry Giroux points out in the foreword, it is important to revalue critical education as a challenge to the “diverse forms of institutional violence.” - Clelia Albano, 5 star amazon review

"Our particular branch of the arts depends rather heavily on the loving depiction of violence in all its forms, but it’s unlikely that most of us ever give it much rational and cohesive thought. How wonderful then than somebody actually has and kindly put it all together in a series of irresistible comic essay dialectics...I strongly urge you to read this collection." - Win Wiacek, Comics Review

"This is a compelling, challenging, and timely introduction to both the contributors and the subject. It makes clear the need for more education and critical thinking on this issue and is an important read for everyone who wishes to better understand it. It should be stressed that this is only a very small introduction to critiques on violence but it is a good introduction for anyone who is looking for more sources on the subject but is not sure where to look." - Maxine McLister

"From one of the best political philosophers around! Anything by Brad Evans is excellent. Here, he edited a collection of short narratives from many other of the best political philosophers. The theme running through connects violence to it's legitimation as a political tool, and not much else "naturally", throughout history. The inclusion of comic portrayals is brilliant, and I'm generally not a comics kind of gal. The various Asian artists have terrifically powerful images here, too…and I hope this is widely read in and out of classrooms." - Christy, Goodreads review

A somewhat 'sarky' but positive review in TIMES HIGHER EDUCATION 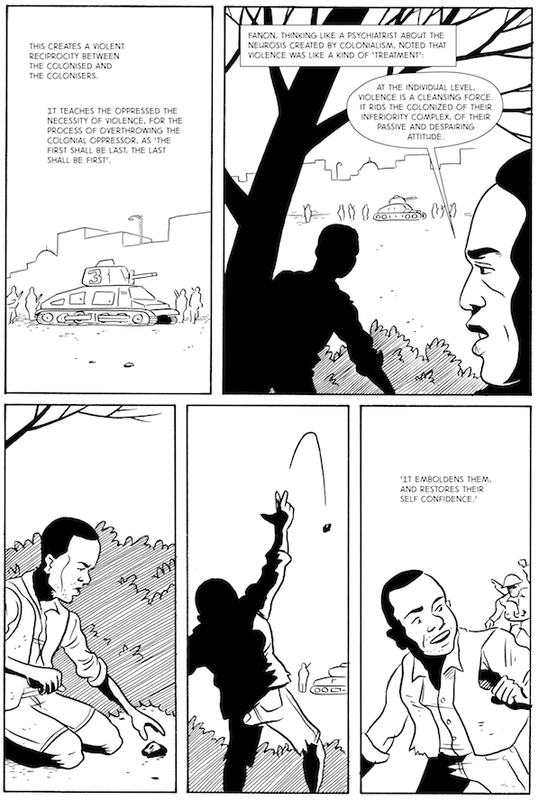 A page looking at Fanon's ideas around violence and colonialism. 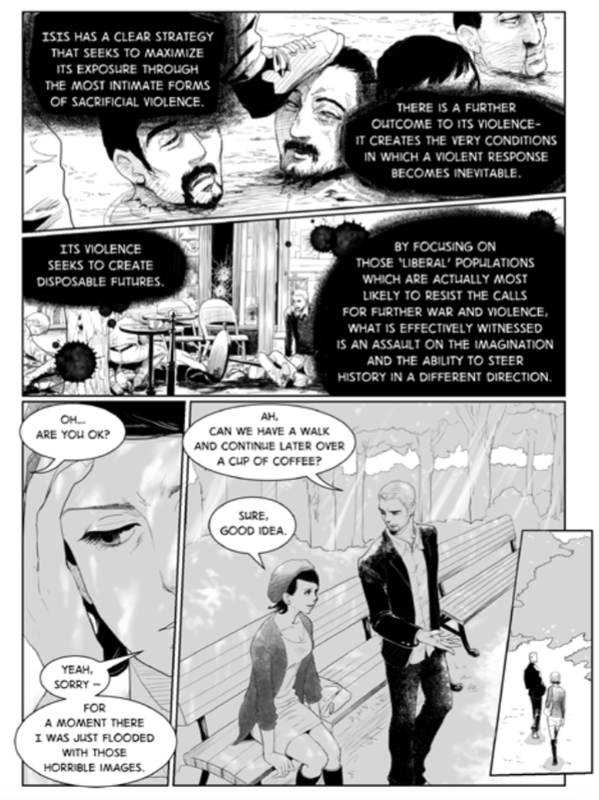 Dr Brad Evans and journalist for the NY Times, Natasha Lennard, take a break from discussing the issues, in Central Park. 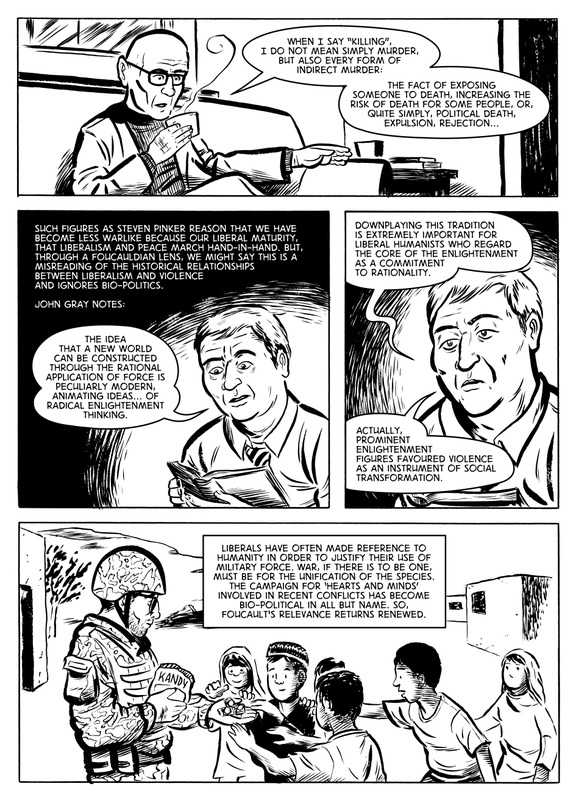 Foucault telling it like it is... in his view anyway. 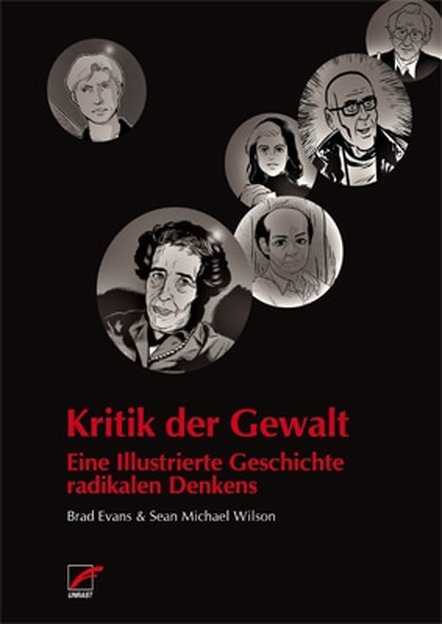 The German edition of the book just came out, March 2017 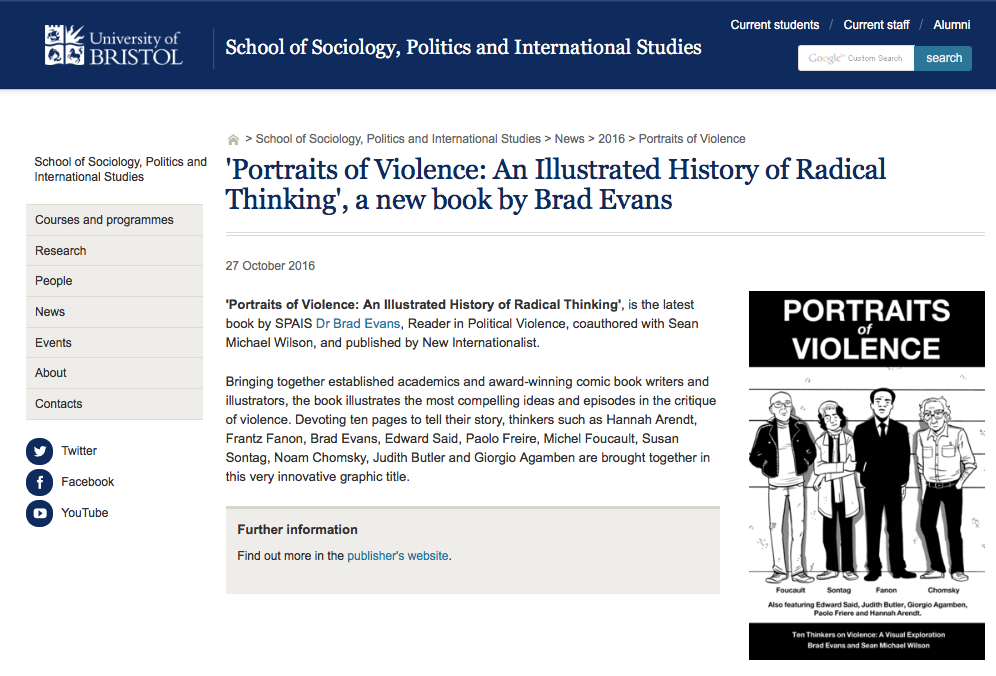 ​
​Exhibition
​Coinciding with the launch of this innovative book collaboration between Dr. Brad Evans (Founder & Director of the History of Violence Project) and Sean Michael Wilson (Award winning comic book writer), there will also be a “Portraits of Violence” exhibition in the UK and the USA. This will provide visually impactful and compelling introductions (in large poster formats) to the most canonical texts written on violence in recent times. Offering new interpretations of these volumes in ways which connect to contemporary political events, the exhibition will be of wide interest to students, academics and members of the public across many age groups.

Dr Brad Evans is a political philosopher, critical theorist and writer, whose work specializes on the problem of violence. He is currently leading a series of articles and dialogues dedicated to the problem of violence for the opinions section of The New York Times (The Stone), and also edits the Violence Section of Los Angeles Review of Books. Brad currently serves as a Reader in Political Violence at the School of Sociology, Politics & International Studies (SPAIS), University of Bristol, UK. He is also the founder and director of the histories of violence project.www.brad-evans.co.uk
www.historiesofviolence.com 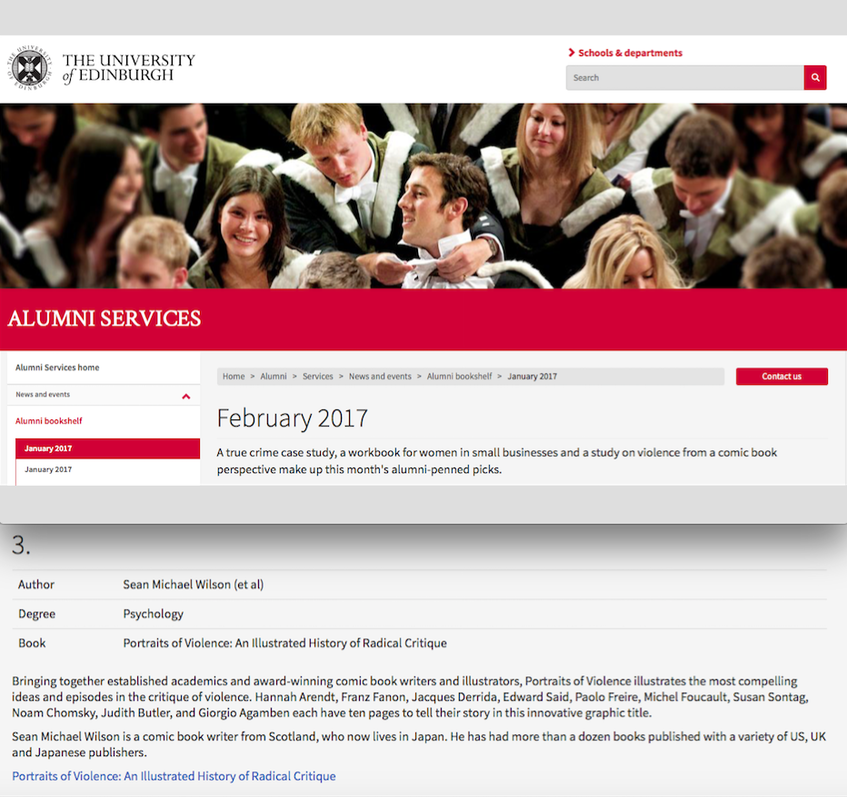 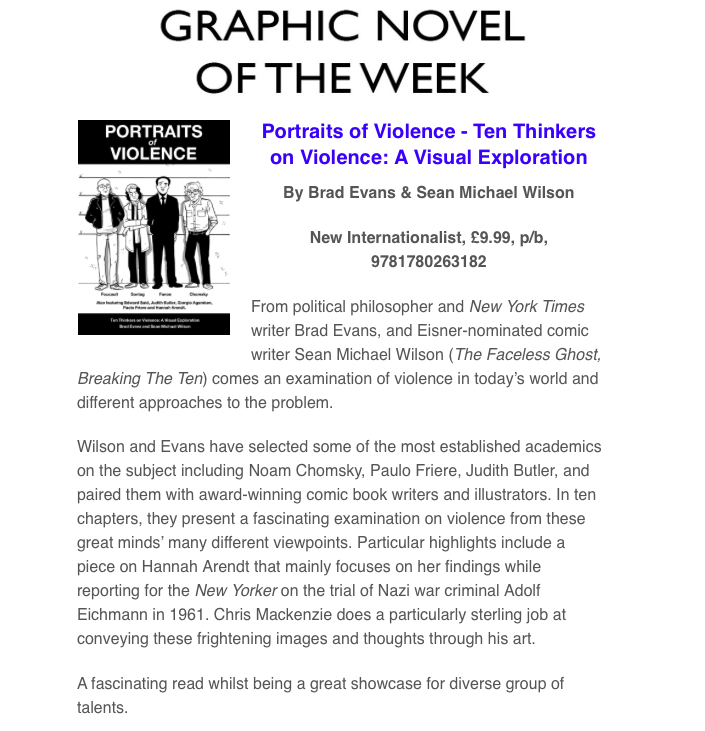 GRAPHIC NOVEL OF THE WEEK PICK FROM TURNAROUND DISTRIBUTORS